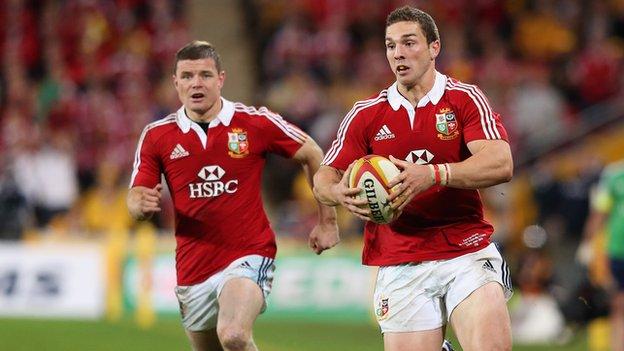 Try-scorer George North has described the British and Irish Lions's first-Test victory over Australia as an "unbelievable feeling".

North and his fellow Wales wing Alex Cuthbert scored the Lions's tries in the 23-21 win in Brisbane.

Australia would have won had replacement Kurtley Beale not failed with two late penalties.

"It was an unbelievable feeling. We won and I got my first [Lions] Test try. It doesn't get much better than that.

"My heart was in my mouth at the end. I think everyone was feeling the same.

"It's always good to get a win, and while it was tough towards the end we are delighted to have got that first win in the series.

"We've spoken a lot about momentum these past few weeks, and that could be huge for us now heading into the second Test next week."

The Wallabies were leading 7-3 through Israel Folau's converted before the Lions hit back with a fine individual try from North.

The 21-year-old, making his Lions Test debut, effortlessly beat three players during a 60-metre run before crossing for his third try of the tour.

"When the ball dropped out of the sky, my first thought was just to run," said North.

"Luckily, I saw a gap and I just went for it. It opened up for me, and I can't begin to tell you how good it felt when I crossed that line."

North, who has joined Northampton Saints from Scarlets ahead of the 2013-14 season, thought he had struck again just five minutes later when he squeezed over in the corner.

But the television match official ruled a combination of opposite number Israel Folau getting a hand underneath the ball and the Lions wing's free arm hitting the touchline meant no try.

"I felt it was a try. At the end of the day, the TMO makes his call and you have to live with it. But I certainly felt that I had got there," North added.

"Perhaps one or two things didn't quite go for us in that regard today, so it makes the win even better."

The Lions face Melbourne Rebels, led by former Wales number eight Gareth Delve, on Tuesday before next Saturday's second Test against the Wallabies in the same city.

Victory at Melbourne's Etihad Stadium would secure a first Lions Test series win since 1997 but North believes there is room for improvement.

"I definitely think we can play a lot better than we did," North added.

"We need to be more clinical, and we need to get a bit more accuracy in our game.

"It's a funny one, really. We know we can play better than that, but we are obviously still delighted to get the win.

"That wasn't our best performance, and we need to keep pushing for next week."

"Australia are not going to lie down and let us win this," Cuthbert said.

"They're going to put in one hell of an effort and I think they thought they probably could have won that game so they're going to be straight at us again next week. We've got a lot to work on."