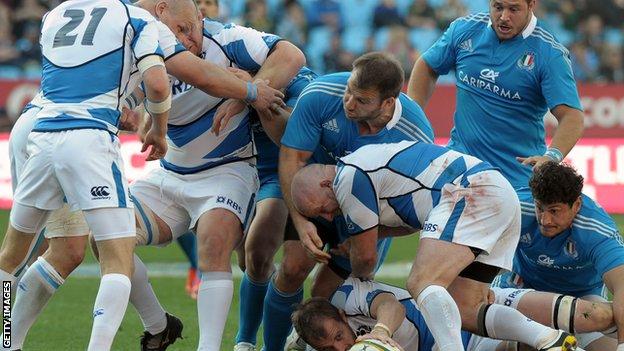 Scotland interim head coach Scott Johnson was pleased to end the summer tour of South Africa with a narrow win but admits there is much to improve on.

A last-minute Al Strokosch try helped the Scots to a 30-29 victory over the Italy in Pretoria.

"I'll take the win but acknowledge that we need to do a damn sight better," he told BBC Scotland.

"If you take the scoreboard away, there's a lot of things we didn't do well. Our performance wasn't good."

Despite being outplayed by the Italians for long spells, Scottish pressure paid dividends as they recovered from a six-point deficit to snatch victory, with skipper Greig Laidlaw converting Strokosch's score.

Matt Scott and Sean Lamont had touched down for Johnson's men in the first half.

"A win is far better than a loss but there are areas that we are trying to take pride in that need to improve," explained the coach.

"We can't shy away from that because the scoreboard favoured us."

Johnson capped 10 new players on the three-Test tour as injuries took their toll on a squad that had already lost four key men to the British and Irish Lions cause.

Scotland were disappointing in the opening loss to Samoa but restored pride with a gutsy display against the Springboks.

"Last week we were simply outstanding and should have got a win," added Johnson. "Today we were poor.

"On the bright side, they showed great resolve and great character.

"This is a hurt team. We were playing wounded there, we've really gone to the depths of our player base."

Laidlaw, who produced a flawless kicking performance in front of the posts, was heartened by the displays from the new faces in South Africa.

"I'm happy with the effort from the boys; we stuck in until the end," said the Edinburgh scrum-half, who moved to stand-off midway through the second period.

"It wasn't the performance we wanted but we won.

"I'm confident we have resilience in the team and the new caps were absolutely brilliant.

"I thought Matt Scott and Alex Dunbar were excellent in the centres, those guys are really maturing and we just need to keep pushing forward as a team.

"It has been tough but there is flip side to that coin. The young guys on the tour have put their hand up and they've given more depth to Scottish rugby already and they've only played in two or three Tests."