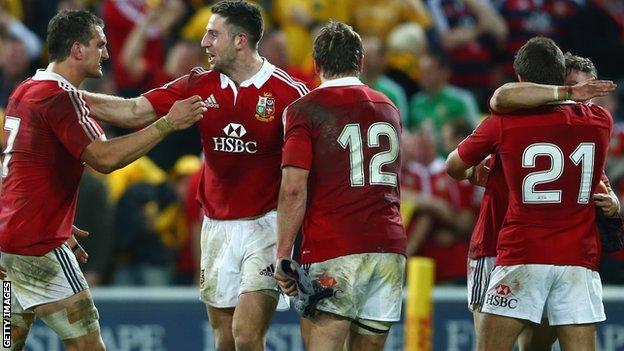 British and Irish Lions captain Sam Warburton declared it "half a job done" after his team narrowly beat Australia in the first of a three-Test series.

The hosts had a late opportunity to win the game, but Kurtley Beale missed a last-minute penalty as the Lions held on for a 23-21 victory in Brisbane.

"It was one of the worst minutes of my life. I thought it was going to go over to be honest," said Warburton.

"It's a great start. We're delighted to win, but it's only half a job done."

Warburton admitted he feared his side would suffer a late defeat, just as his Wales team had done on three occasions against Australia last year.

"I thought I was in the same situation as last year with Wales," added Warburton.

"It has happened way too many times before. When it is taken out of your hands with a kick, all you can do is watch.

"We gave away cheap penalties so there's plenty to work on, but it's a massive achievement to come out here and get the win.

"We celebrated for a bit but after a while we realised we have to back it up next week."

As they regroup, the Lions will reflect on a match that could have gone the other way, with the Wallabies missing five penalties in all and having three players carried off injured.

"We tried to play a bit of rugby, probably too much in the first half," said Gatland.

Australia centre legend Tim Horan: Congratulations to the Lions. It was a great match and that's what rugby is all about.

Ex-Ireland and Lions centre Ron Henderson: I thought Mike Phillips did OK but was outshone by my man of the match, Will Genia.

Former Wales captain Michael Owen: I don't agree with the stick the referee is getting. I felt he did well and everything was even handed.

"We knew it was going to be tight, there's not a lot of difference between the two sides. Like a sparring match the teams were finding out a bit about each other in the first Test.

"Both teams will get better after that hit out. It wasn't the prettiest performance, but it was the victory we deserved."

The Lions play a warm-up match against Melbourne Rebels on 25 June before the second Test in Melbourne on 29 June. The series concludes on 6 July with the third Test in Sydney.

"It will be a close series," added Gatland, who will have Ireland winger Tommy Bowe available for the second Test after surgery to fix a broken hand.

"Next week we will have a few players back and that will strengthen our squad. It wasn't the prettiest performance, but it was the victory we deserved."

Australia captain James Horwill said ill-discipline and errors had cost his side victory.

"In the first half we didn't have a lot of the ball, but we made the most of what we had and we can take a lot of confidence out of that," he said.

"In the end we need to be a bit more clinical and make the most of our opportunities. We can take a lot of confidence into next week."