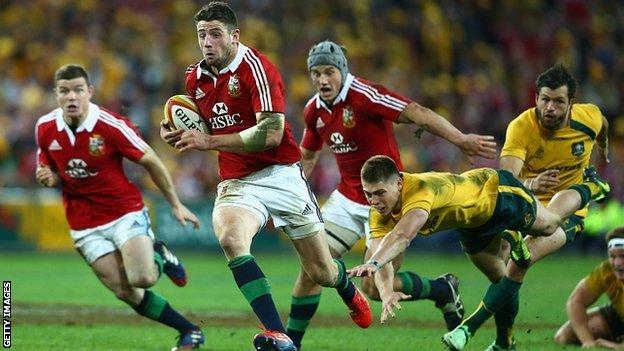 The British and Irish Lions took a major step towards a first series victory in 16 years with a pulsating opening-Test win over Australia in Brisbane.

A dramatic conclusion to a compelling encounter saw Wallabies replacement Kurtley Beale miss a penalty with the last kick of the game that would have snatched victory.

The Lions led 13-12 at half-time via George North's stunning try and two Leigh Halfpenny penalties after a brace of tries for Australia wing debutant Israel Folau.

Alex Cuthbert's try stretched the Lions' lead, but two penalties from Beale brought the hosts to within two points.

He had two opportunities to steal victory, but sliced the first wide with five minutes left and then slipped as he connected with his last-minute effort amid unbearable tension.

That meant 14 points had gone begging in missed kicks for Australia, with James O'Connor also failing with two penalties and a conversion.

The Lions' relief at their good fortune was palpable, but they will head to Melbourne for the next instalment mindful that the team which won the first Test in each of the last two series between the sides, in 1989 and 2001, ended up losing it.

The match had barely started when Wallabies centre Christian Leali'ifano got his head in the wrong position trying to tackle Jonathan Davies and appeared to knock himself out.

Halfpenny immediately alerted referee Chris Pollock and the centre was taken off on a cart only 52 seconds into his debut.

A second player, full-back Berrick Barnes, departed in the same fashion two minutes before half-time after smashing into a retreating Folau.

The ex-rugby league international and Aussie Rules footballer had already marked his own debut in stunning style by then, however.

After O'Connor had missed two early shots at goal as the Lions struggled to come to terms with Pollock's interpretation at the breakdown, Folau made an explosive entry to Test rugby in the 13th minute.

The Lions had spent several minutes hammering away at the Wallabies defence before the hosts won a penalty on their own 22.

The ever-dangerous Will Genia took a quick tap and raced away to halfway, waited for Halfpenny to commit himself before sending a delicate chip into the path of Folau, who picked up and sprinted over. This time O'Connor couldn't miss from in front of the posts.

The momentum was all with the hosts, Cuthbert fumbling a Genia box-kick under no pressure, Genia sending prop Benn Robinson through a gap.

But after strong charges from Jamie Heaslip and Mike Phillips, Wallabies captain James Horwill was pinged for coming in at the side and Halfpenny made it 7-3 with a confident swing of his right boot.

North then made his own explosive entrance to this series. Collecting a Barnes clearance 10m inside his own half, the giant Welsh wing eluded Pat McCabe's initial attempted tackle and O'Connor's ankle tap, then scorched away in an arcing run to the left corner, leaving Barnes in his wake in a manner reminiscent of the way his predecessor in the Lions number 11 shirt, Jason Robinson, undid Chris Latham 12 years ago.

Halfpenny nailed the touchline conversion and minutes later North was over in at the left corner again, barging through Genia and Folau's tackles to dot down. But television match official Vinny Munro ruled North's left elbow was fractionally in touch as he grounded the ball.

But Pollock had already blown for offside in the build-up and Halfpenny stretched the Lions' lead.

Australia hit back immediately when the supremely athletic Folau was released into space, stepping inside Sexton and beating Halfpenny to score his second.

But O'Connor's third miss of the night from the tee meant the Lions remained in front.

Beale, on for the unfortunate Barnes, received an immediate welcome from Tom Croft on the charge - after a pick-up and break from the impressive Alex Corbisiero - as the Lions threatened again.

Australia cynically went off their feet to concede a penalty rather than seven points, but this time Halfpenny's radar failed him for only the second time in 27 shots at goal on tour.

When McCabe became the third Wallaby to be taken off on a stretcher within six minutes of the resumption, the hosts were forced to switch flanker Michael Hooper to centre, with Liam Gill taking over at open-side.

Their problems deepened when Cuthbert, coming in off his right wing, hit a perfect angle onto Sexton's pass and powered his way over, Halfpenny's conversion taking the Lions 20-12 clear.

O'Connor's penalty reduced the deficit, but the Lions might have added to their tally after a thrilling break-out, only for referee Pollock to adjudge O'Driscoll's delicate offload marginally forward.

Instead Beale landed a long-range penalty to cut the Lions' lead to two, Halfpenny responded in kind, before Beale again made it a two-point game with 12 minutes left after his own thrilling counter-attack had forced the Lions to infringe in their own 22.

The Lions wasted a golden opportunity when they lost a scrum on their own put-in five metres from the Australia line. But Beale, returning to action after receiving counselling for alcohol-related issues, could not make them pay.