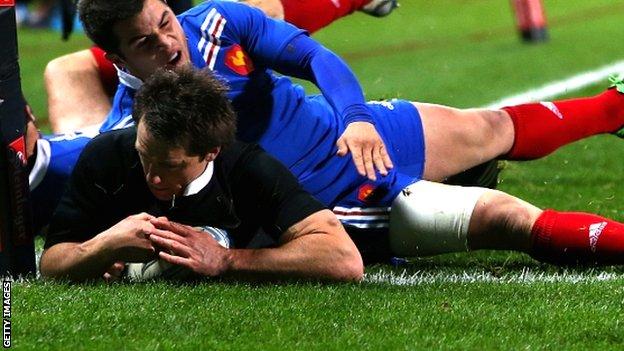 Carter, in his first All Blacks appearance of the year, moved within one point of becoming the first player to reach 1,400 points in Tests.

Ben Smith and Beauden Barrett scored tries for the hosts, who were not as incisive as in last week's 30-0 win.

And the tourists had lock Yoann Maestri sin-binned for an apparent head-butt in the final 10 minutes.

Philippe Saint-Andre's men showed a greater intensity than they had in the opening two matches of the series and took an eighth-minute lead when centre Fritz landed his drop-goal.

And they were unlucky not to be ahead at the interval after some wayward goal-kicking by scrum-half Doussain, who missed two penalties.

But after a long pass from full-back Israel Dagg that cut out three defenders, Smith slid over in the right corner in the 35th minute for his second Test try of the season, underlining his status as the most influential player of the series.

He also put in a kick that led to a try by hometown hero Barrett late in the game, ensuring New Zealand recorded their first three-Test series whitewash against France for 43 years.

The All Blacks next play Australia in the first Test of the southern hemisphere's Rugby Championship in Sydney on 17 August.

France's next game is a home match with the All Blacks in Paris on 9 November.