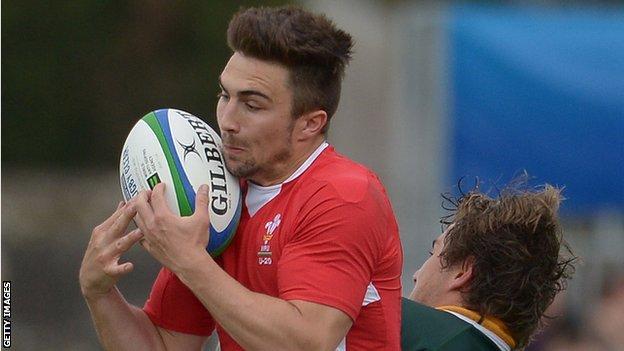 Coach Danny Wilson is confident Wales Under-20 can beat England U20 in in Vannes, France.

He makes three changes for the first International Rugby Board final between the two nations.

Carwyn Jones returns at lock, Jack Jones moves to flanker and Elliot Dee is at hooker.

"We're confident...that if we can peak in our performance we can... walk away with the prize," said Wilson.

Jones - grandson of the late former Wales lock and Neath team manager Brian Thomas - moves from the second-row where he will oppose Ross Moriarty,

Dee takes over from Ethan Lewis in the middle of the front-row, the latter dropping to the bench.

England beat Wales 28-15 to secure the U20 Six Nations in March.

But Wilson says that clash only served to give his players the experience to win Group C encounters against Samoa, Scotland and Argentina's age-group counterparts before shocking holders South Africa in the semi-finals.

He and his players were also determined to build on a historic 9-6 win over previously unbeaten New Zealand in the 2012 Group stages.

The Junior All Blacks went on to lose to the Baby Boks - the first time a team other than New Zealand hand won the tournament.

This time Wales reached their first final by securing a dramatic 18-17 semi-final victory over South Africa.

England booked their place in the final with an impressive 33-21 win over four-time winners New Zealand.

Wilson added: "Our aim was a semi-final and then assess from there.

"And once we'd made the semi-final and drawn South Africa, once we'd had a look at them we really felt confident that we could beat them.

"And likewise, if I'm honest, for this game - we know we're playing a very strong England team who have beaten us and we go into the game as underdogs.

"But we're confident, like against South Africa, that if we can peak in our performance we can come away with a win and walk away with the prize.

"We learnt some big lessons from that [Six Nations] game and some of the lessons that we learnt and put right, if you like, helped us beat Argentina and South Africa.

"England have a strong pack of forwards and play a specific game that we need to be able to deal with.

"But a lot will come down to the day, both sides' game plans and who can play the better.