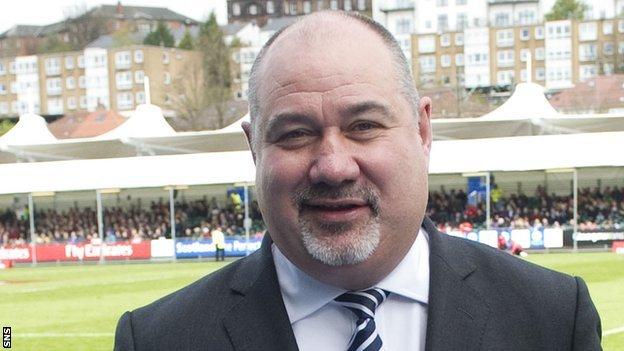 Scottish Rugby have announced a reduced profit for the year to 30 April but say their year-end debt is at its lowest position in over 10 years.

Chief executive Mark Dodson said: "By attracting more supporters to our game we have encouraged further investment over the past 12 month.

"We have welcomed a number of new sponsors, while commercial partnerships have been developed."

Scotland won two of their Six Nations matches earlier this year, which followed three defeats in the autumn Test series.

Glasgow Warriors were beaten in the Pro12 play-off semi-finals but Edinburgh had a disappointing league campaign and are looking for a new head coach.

Both of the Scottish pro-teams struggled in the Heineken Cup, with neither progressing from the pool stage.

"We have been very encouraged by the progress made by Glasgow Warriors over the last season," added Dodson.

"They now have a new coach [Gregor Townsend], a new home [Scotstoun Stadium] and increased revenue through sponsorship and ticket sales. They are also playing an exciting brand of rugby.

"Clearly results from Edinburgh were disappointing and we have already taken, and will continue to take, all the steps necessary to reverse that trend going into next season."