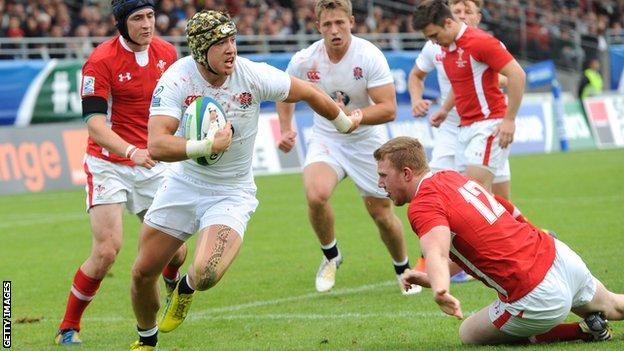 England became world junior champions for the first time as they fought back from a 12-point half-time deficit to beat perennial rivals Wales.

A brace of tries by Ashley Evans and five points from Sam Davies's boot gave Wales a 15-3 lead at the break.

England had a try disallowed either side of half-time, but Jack Nowell finally powered over in Vannes, France.

Wales were the better side in the first half hour of the first all-northern hemisphere final in the six-year history of the tournament, with Ellis Jenkins and Jack Jones sharp at the breakdown, controlling the game well from fly-half and Evans finishing superbly out wide.

England's indiscipline - notably from second row Dom Barrow, whose stray knee in a ruck cost them a try and saw them reduced to 14 men for 10 minutes - and mistakes undermined their first-half performance.

But the longer the game went on the more their power game began to tell, with the likes of captain Jack Clifford, replacement blind-side David Sisi and hooker Luke Cowan-Dickie making big inroads with ball in hand, and they finally got hold of the breakdown as well.

Starved of possession, Wales were forced onto the back foot as England ensured that, just like in the senior World Cup, they became the first champions from the northern hemisphere, with New Zealand, who won the first four editions, and defending champions South Africa the only other teams to win the tournament.

Slade missed a kickable early penalty for England, who were making their fourth appearance in the final, and it was Wales, making their first ever appearance at the business end of the tournament, who took the lead with a stunning try.

Right wing Evans made the initial slashing break off a neat inside pass in midfield and after the Welsh recycled, Davies picked out the winger - by now back on his regular station on the flank - with a perfect cross-kick to score.

Fly-half Davies - who edged out England captain Clifford to win young player of the year award - could not convert from out wide.

Slade and Davies exchanged penalties before England prop Alec Hepburn tried to force things under pressure and Evans picked off the pass to score under the posts, handing Davies an easy conversion.

Trailing 15-3 England had to score next, but in the final act of the first half Tom Price saw his try disallowed for use of the knee in a ruck by fellow second row Barrow.

It could have been a hugely costly act of indiscipline by the Leeds lock, especially as he was also yellow carded, and although Wales did not manage to score while England were down to 14 men, victory looked a long way away for the Six Nations champions.

England had beaten Wales to end their Grand Slam dream back in March but the Welsh looked set to gain revenge as their defence shut England down every time they attacked.

Approaching the hour mark they looked in control but England suddenly started holding on to the ball and, although replacement prop Danny Hobbs-Awoyemi was denied a try after being penalised for crawling over the line, the young men in white finally clicked into gear.

Big carries from a quick tap by Clifford and Sisi punched holes in the Welsh defence and Nowell, who shone for Exeter in the Premiership last season, brushed aside the Welsh half-backs to score.

Nowell's Exeter team-mate Slade converted and the gap was down to five points.

The fly-half immediately missed a simple penalty but England's power game was now in evidence and a lively run from Anthony Watson sparked an attack that ended with Hill - yet another Exeter player - powering over after a flowing attack.

This time Slade made no mistake and a couple of late penalties ensured England won going away.