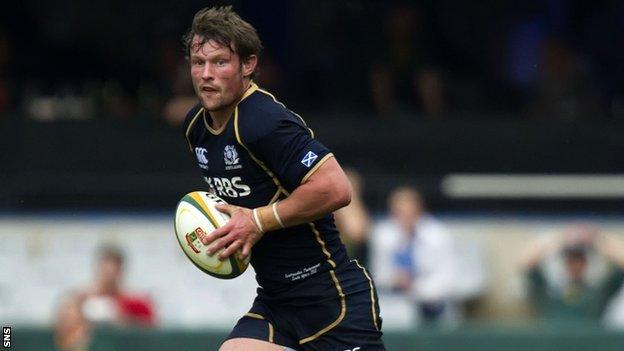 Scotland back Peter Horne is out for nine months after tests confirmed he suffered ligament damage during last week's defeat by South Africa.

The Glasgow Warriors player sustained an anterior cruciate ligament injury in the 30-17 loss.

Horne, 23, had come on as a first-half replacement in Nelspruit but was stretchered off in the second period.

Horne wrote on Twitter: "Ill be back and better than ever you can hold me to that!

He added: "So, let the recovery commence!!"

Warriors head coach Gregor Townsend reacted to the news of Horne's lay-off by saying: "We're all gutted for Peter.

"He epitomizes everything that's good about the club, with his workrate and desire to improve.

"This earned him the players' player of the season award last season and his first Scotland cap in South Africa.

"His reaction to such a serious injury on the field last week showed how much he was willing to sacrifice himself for the good of the team, as he fought to get back up after his injury to be involved in Alex Dunbar's try."

Ryan Wilson also came off against the Springboks and the Glasgow flanker will have further tests on his shoulder problem.

Townsend has received better news regarding Pat MacArthur, who picked up a medial ligament injury in Scotland's first Test of the tour to South Africa, the 27-17 defeat by Samoa.

The hooker is expected to be fit in eight weeks, putting him in contention for the start of the Warriors' Pro12 season.