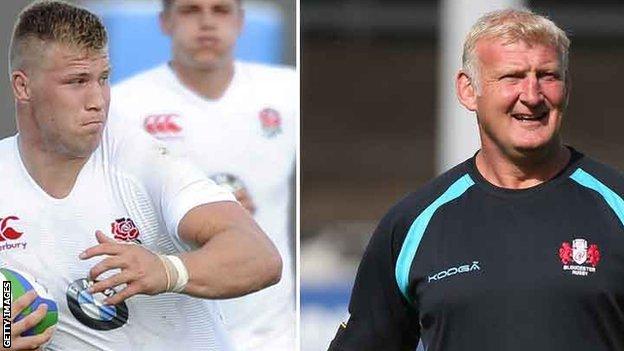 Former Wales back-rower Paul Moriarty will support England in Sunday's Under-20 World Championship final against the Welsh, because son Ross plays for them.

St Helens-born Ross opted for England - and Paul will support them in Vannes.

The Gloucester defence coach will be in France with his club boss, and former Wales team-mate, Nigel Davies, whose son Sam will be at fly-half for Wales Under-20.

The two sons, both 19, are former team-mates, having been part of Swansea City football club's junior set-up between the ages of eight and 12.

Ross Moriarty was born in Lancashire when his father was playing rugby league, and came to the England selectors' attention after moving from Swansea to Hartpury College in Gloucestershire, which has close links with Aviva Premiership club Gloucester.

Former Wales assistant coach and current Welsh Rugby Union national academy manager Allan Lewis was at Hartpury and attempted to ensure Ross would follow in his father's footsteps into the Wales set-up.

Paul Moriarty said: "Wales were aware of him. But England asked first and that's who he's playing for at the moment.

"And it was ironic that in the same week that England selected him for their under-18s that Wales invited him to be part of the Welsh 18s.

"But he'd already said that he was going to opt for England.

"It's entirely up to him. It's a decision that he's made and England were the first to ask the question and he said yes to them.

"So out of principle, anyway, he wasn't going to say yes to England and then reject the opportunity after Wales enquired.

"At the moment things are going well for him and I'm fully supportive of him and the fact he's playing for England.

England booked their place in the final with an equally impressive 33-21 win over four-time winners New Zealand.

England beat Wales 28-15 to secure the U20 Six Nations in March.

Ross Moriarty did not play in that game, having been been banned after being sent off for a dangerous tackle in their clash against Ireland in February.