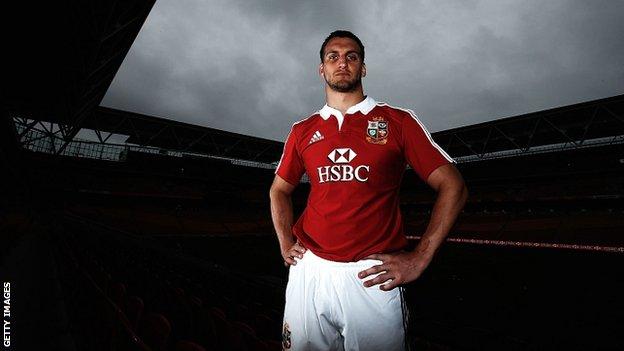 No-one, it seems, is in any doubt about the scale of what is about to unfold in Brisbane on Saturday.

The hype around the first Test of a British and Irish Lions series can make mature rugby men voice grand pronouncements, and the participants wide-eyed with anticipation.

"It is unique, not just in rugby. It is unique in world sport," said Australia coach Robbie Deans. "It's going to be an epic occasion."

Sam Warburton, preparing to lead the Lions into action, observed: "I have led Wales out in some pretty big games, but this will blow it out of the water."

By 20:00 local time (11:00 BST), with kick-off approaching, the 52,500-capacity Suncorp Stadium will be jumping, swirling with emotion and expectation that has been building for 12 years.

That is how long it has been since the last Lions Test in Australia, and the window of opportunity is something players, coaches, supporters, hoteliers and publicans are keenly aware of.

It would be an exaggeration to say the country is gripped by Lions fever. At the start of the week, media coverage was still almost an afterthought following rugby league, Aussie Rules football, cricket, the football Socceroos, golf and even the NBA finals.

It is only in the last 48 hours that the traditional fervour accompanying a Lions tour has been apparent, with the arrival in Brisbane of an estimated 25,000-30,000 travelling supporters.

The covered, open-air bars of the city's Queen Street mall are doing brisk business. There are red Lions jerseys and jackets everywhere, and plenty of Welsh accents.

The beauty of Lions tours is their rarity. They only arrive every four years, with New Zealand and South Africa their other destinations. And the allure of witnessing some of the greatest moments the sport has to offer is compelling, despite the cost.

With the price of a schooner (less than a pint) of beer around $A8 (£4.70), Australia is now one of the most expensive countries in the world. City centre hotels were charging between £400 and £600 a night for this weekend.

Platinum tickets for the Tests cost A$295 (£175) each. Those scrambling for them received a last-minute boost on Friday when officials released a final batch of 500 for sale.

One couple, Judith and Graham from Newport, South Wales, spent two years - and £30,000 - planning and saving to follow the tour from Perth, the first match in Australia, to the finale in Sydney. They are not alone.

This is their fifth Lions tour. On their first, also the first of rugby's professional era in 1997, they were among around 5,000 Lions fans present when the tourists won the series in Durban.

By the time of the next tour, of Australia in 2001, at least five times that amount were thought to be at The Gabba in Brisbane for the Lions' mesmerising first-Test victory. The impact of this vast army of travelling fans is huge, not just on the local economy, but the players too.

"When we ran out it felt as though the ground was three-quarters red," recalled Brian O'Driscoll, the day before he embarks on a fourth Lions series in the same city where he scored one of the great tries in Lions history 12 years ago.

"It gives you an extra pep in your step and gives you added incentive, providing you with that inspiration you need to play the game of your life."

Wallabies coach Deans has brought in former players involved in the 2001 series to forewarn the current side of what to expect. "The passion that came out was at another level," he noted. "The fact that there were so many away supporters, with a clear delineation, made it so special."

The hosts are trying to avoid a repeat on Saturday. The Australian Rugby Union will be handing out 15,000 gold safari hats to Wallaby fans to combat the anticipated sea of red. The same will happen in Melbourne and Sydney for the second and third Tests.

To ramp up the patriotic fervour another notch, 'rock legend' Colin Hay, the frontman of the group Men At Work, will perform their iconic hit (I Come From a Land) Down Under before kick-off as part of the 'Welcome to Australia' theme to the pre-match entertainment.

Those lucky enough to be present are likely to see a thrilling spectacle. Although steady rain hit Brisbane on Friday, conditions for the match should be perfect, with the forecast for Saturday dry and warm.

The Wallabies have a formidable record in Brisbane, having lost only two of the 17 Tests they have played in the city since the last Lions tour in 2001. They are undefeated in their last six Tests in the city.

But then the Lions also have fond memories of the Queensland capital.

'The Battle of Ballymore' - the brutal second Test in 1989 - and the brilliance of 'Waltzing O'Driscoll' at The Gabba in 2001 are both ingrained in Lions folklore.

They come into this series with momentum, having won the two biggest games leading up to the Test series against Queensland Reds and New South Wales Waratahs, the latter in some style.

The midweek defeat by ACT Brumbies was a jolt to the squad, but only one of the players who started that game - Ben Youngs - is in the Lions' match-day squad on Saturday.

Several players and coaches have made the observation that this Lions party is stronger than the one that came agonisingly close to a series victory in South Africa four years ago.

The pool of talent is deeper, and there is "savage competition" - in the words of Irish forward Paul Connell - for places. They are fitter, faster and more powerful than probably any previous Lions squad, and well drilled by Warren Gatland and his fellow coaches.

"There is almost like an arrogance running off them where they believe they can win this series," observed Shane Williams after his dramatic call-up from international retirement to join the squad for the Brumbies game. "That's great to have. Sometimes these tours are won mentally rather than physically and they are in a strong mental place at the moment."

The Wallabies are more of an unknown quantity, having spent three weeks in camp together rather than play any warm-up matches.

They have three players making Test debuts, and several others coming into it with little game time under their belts. But their ingenuity and resourcefulness always make them dangerous opponents, whatever the circumstances.

The Lions start marginal favourites, but a victorious Lions tour is a precious and increasingly rare thing. There have only been four in the 17 full series since the Second World War.

It is not just the Lions who feel this way. Their opponents do too. Wallabies full-back Berrick Barnes said this week "there's more excitement for this series than there was for the World Cup".

In case the hyperbole goes too far off the scale, Barnes could at least bring a little perspective to a game in which both sets of players will be under inordinate pressure to perform.

"There's a lot riding on it but we're not trying to cure cancer," he said. "It's a game of footy that will be great to be involved in."

Whatever the result, Brisbane will be painted red.