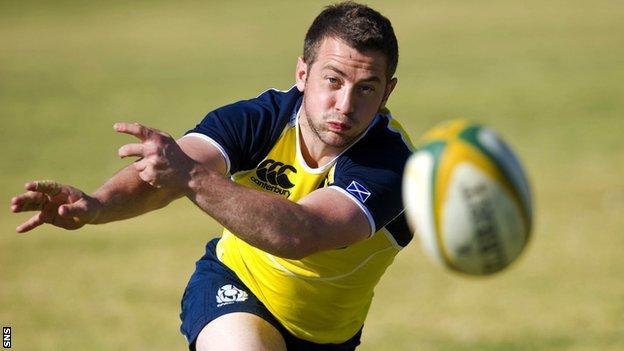 Scotland rugby captain Greig Laidlaw believes that the standard required to play for the national team has been raised over the past few months.

Scrum-half Laidlaw insists the players now know what is required if they want to be part of the Scotland set-up.

"When you are working under a coaching system with Johno (Scott Johnson) in charge there is only one thing that's going to happen," he said.

"He and his team are really driving it and that's the way it should be."

Scotland play the final match of their injury-hit South African summer tour against Italy on Saturday.

Defeats by and , the latter a spirited effort featuring new caps Peter Murchie, Tommy Seymour and Tim Swinson last Saturday, mean the best Johnson's men can achieve in the quadrangular tournament is a third-place finish if they overcome the Italians.

Laidlaw, who says the players have reacted well to Johnson's instruction, continued: "I'm expecting no less a performance this weekend than last weekend.

"I think Scott will be excited by the way that the new caps have performed on the tour because I think they have done very well.

"If we can round that off with a win this weekend for the new caps we'll all be very happy."

In Laidlaw's opinion, the senior players have helped the likes of the Glasgow Warriors trio who made their international debuts against the Springboks and who keep their places in the team to play Italy.

And he highlighted Alasdair Strokosch's speech to the team ahead of the match against South Africa as particularly motivational.

"He doesn't say much, but when he does speak the players listen," said Laidlaw.

"It was very inspirational. He's great to have in the team.

"He usually performs his words as well and that is extremely important. We've got a guy out there who, along with myself, can guide the team in the right direction."

Laidlaw insists Italy will be no pushover despite the fact they have lost heavily in both of their matches in South Africa in the past two weeks.

"We are looking forward to this weekend and finishing off the tour with a win," he added.

"I don't think they will be looking forward to the game, especially as it's being played at altitude.

"We want to play at a high tempo, a fast game. The first 20 minutes are key for us.

"If we can control the speed of the game that will be the key to us winning this weekend.

"In the past, in the games we've struggled against them, we've let them into the game early doors. They build confidence and get their scrum going. We want to be assertive and play the game in their half."