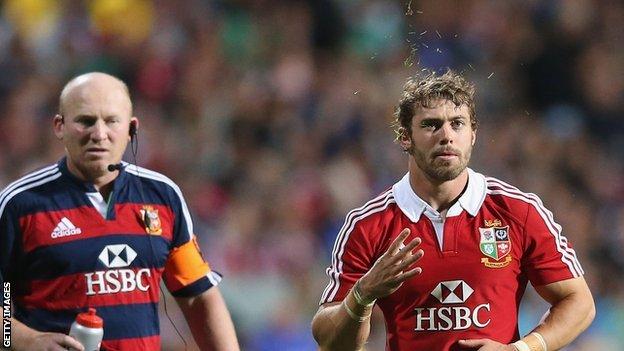 Halfpenny has missed once from 23 shots in three warm-up games in the build up to Saturday's first Test in Brisbane.

"Jenks [Jenkins] can only do so much. It is up to us to go out and perform," Halfpenny said.

Jenkins became the world's record points scorer in 1999, going on to total 1,090 points in 87 games for Wales and four Lions Tests.

The former Pontypridd and Cardiff player retired in 2003 and became a kicking coach, returning to the Test arena in that role in 2004.

Halfpenny, with 294 points from 44 Wales appearances, is grateful for Jenkins' guidance, saying: "For me, Jenks has been huge since he picked me up in the academy and I have come right through with him to senior level.

"He has been massive in terms of my preparation for every game. He was the best [goal-kicker] in the world in his day, and I couldn't think of anyone better to have, bringing on the tee for me and giving me little pointers just before the kick and things. He's huge for me in that regard.

"He has just been massive for me in terms of my progression through the years and preparing me mentally and technically."

He added three more conversions after coming on as a replacement in their in which he missed his only shot at goal on the current tour.

"We all know how fine the margins are between winning and losing in international rugby, and how often kicks decide the outcome," said Cardiff Blues player Halfpenny.

"I am obviously pleased with the way things have gone in the last couple of games, but that's gone.

"It's about getting back on the pitch now and putting in the hard work and making sure I'm as prepared as best as possible to go into Saturday - and hopefully continue with how it has been going."

Goal-kicking apart, Halfpenny has also made his mark in attack and in defence, particularly under the high ball.

"I really love every aspect of the role of full-back," said Halfpenny.

"I love the aerial battle, I see it as a challenge between myself and the guy chasing. Owning the sky, I like to call it. I love it.

"Every time that ball goes in the air, the challenge has been put up there, who is going to collect it? It is an area we have worked very hard on throughout."