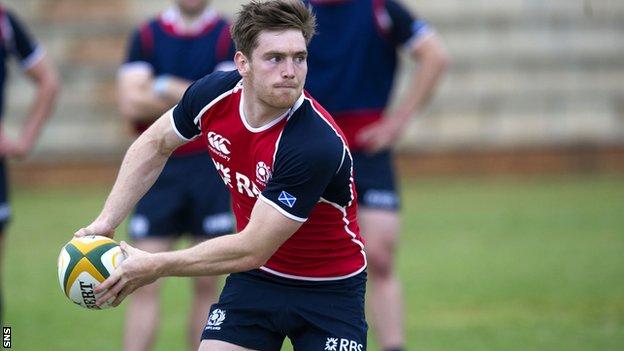 Scotland welcome back Tom Heathcote for Saturday's Test against Italy at Loftus Versfeld in Pretoria.

The 21-year-old Bath stand-off missed last weekend's 30-17 loss to South Africa after suffering concussion in the 27-17 defeat by Samoa.

And Al Kellock, 32, will earn a 55th cap at lock in place of Jim Hamilton, who has returned home for the impending birth of his second child.

Heathcote will win his third cap, while more experienced Glasgow stand-off Ruaridh Jackson, 25, has not overcome a shoulder injury sustained when Scotland lost to the Springboks in Nelspruit.

"I said that this tour would be about broadening our base and that we'd find out about whether certain players were ready to play international rugby," said interim head coach Scott Johnson.

"That has happened and we'll take a lot from that but we also want to end the tournament on a high against an Italian team that we know well and that we respect greatly."

Glasgow's Rob Harley, 23, who flew out this week as a late replacement for club-mate Wilson, is named among the replacements, as is the uncapped hooker Fraser Brown, whom Johnson hopes to bring on at some point.

The coach said: "We all know there are questions about players: what skill sets have they got, can they go to the next level, does he suit international rugby?

"We have always had the questions, this tour was about finding some answers. We don't have them all but we are a good way down the track, which is a good place to be.

"In some cases I have no one left, and in some cases we still have some injury concerns going into the match, but that is life. Don't expect us to do anything other than go out and perform.

"I want competition for spots, I don't want kids to think they have a divine right to play for their country, I want it to be competitive.

"It is always important to finish in a positive frame of mind. The benefit of this tour will be written in a couple of years, because there will be competition. We have been knocked about on tour but have shown a bit of resilience."

Sergio Parisse will skipper Italy for the 50th time, while lock Leandro Cedaro and wing Leonardo Sarto will be winning their first caps.