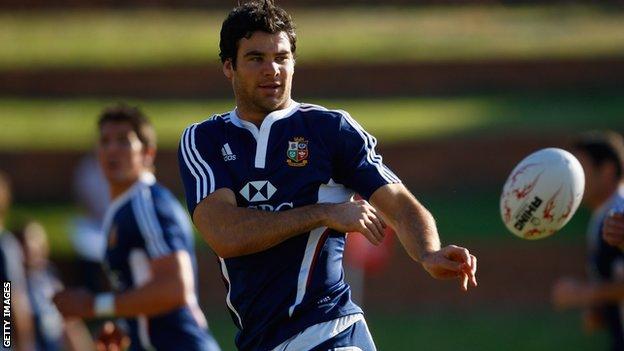 Australia scrum-half Will Genia admits the key to the Lions series could be whether or not he is able to nullify opposite number Mike Phillips.

The sides meet in Brisbane on Saturday for the first of three Tests.

"There's obviously been a lot of emphasis on him in our camp," Genia, 25, told 5 live. "If he gets going he gives his side good momentum.

"Phillips is a big guy who carries like a forward. He's abrasive, aggressive and likes the physical contest."

Genia is widely regarded as Australia's best player and his battle against Phillips will be one of the most eagerly anticipated head-to heads on Saturday.

The two players are very different though. Phillips is 6ft 3in, 16-and-a-half stone and combative in attack and defence. In contrast, Genia is 5ft 8in, less than 13 stone, and less confrontational on the pitch.

"The last few times we have played Wales we have spent a lot of time trying to nullify his [Phillips'] threat at the rucks and the breakdown because we know he can be dangerous," said Genia, Australia's vice-captain.

"He can dent the line and get his arms free and look for offloads. That's the way he likes to assert himself on the game. He enjoys the niggle as well, so I like playing against him.

"And then there's Ben Youngs [the British and Irish Lions reserve scrum-half], who I think has a bit more subtlety to his game and he is a bit more of a playmaker."

Phillips - who has never beaten Australia after being injured the last time Wales managed it, in November, 2008 - had a titanic battle against Fourie du Preez when the Lions lost 2-1 to South Africa four years ago.

Interestingly, Genia says he modelled his game on the legendary Springbok.

"For me, he's the best number nine to ever play the game," the Queensland Reds player admitted. "He was a great distributor, a brilliant kicker and he was great under the high ball.

"He could do everything and he revolutionised the position in the sense that he was also a counter-attacking half-back.

"I've learned a lot from him. If there's one person I really modelled myself on it's Fourie du Preez."