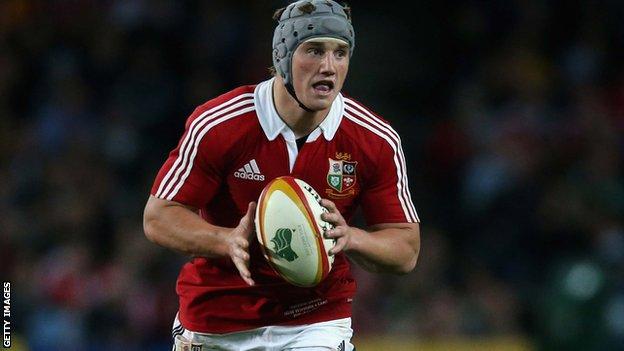 Centre Jonathan Davies says he is relishing the "incredible" chance to partner Ireland's Brian O'Driscoll in the centre for Lions.

The Wales centre is paired with O'Driscoll in the Lions midfield to face Australia in Brisbane on Saturday.

Davies is one of eight Welshman selected for the Lions first Test.

"To partner him in the centre, with what he's achieved in the game, is something incredible really," said Davies

"We just have to build an understanding and a relationship to make sure we are on the same page on Saturday."

Davies, 25, will make his Lions Test debut against the Wallabies, alongside O'Driscoll, who is on his fourth Lions tour and winning his seventh Lions Test cap at Suncorp Stadium.

The Scarlets centre was an outsider to make the Lions Test side, with fellow Wales centre Jamie Roberts or England's Manu Tuilagi expected to partner O'Driscoll.

While Roberts (hamstring) and Tuilagi (shoulder) were ruled out of first Test selection, Davies has still produced a string of impressive performances on tour to earn his place in the Lions Test side.

Davies, a Grand Slam winner with Wales in 2012 and a Six Nations title winner in 2013, has become a regular for his country and cannot wait to make his Lions Test bow.

"It is something special, you speak to the boys who have been on tour before and they say the Test team is the pinnacle of your career," said Davies.

"I am just thrilled to be involved and excited about the game on Saturday.

"I have been fortunate that I have had plenty of game time and I have worked hard in training to make sure I prepare well.

"I have been really pleased with the way I have been playing and I just have to keep going with that."

Davies, normally an outside centre by trade, will move to number 12 to partner O'Driscoll.

"I have played 12 on this tour already and I am happy enough to play there," said Davies

"I would play in most positions... to be a Test Lion."