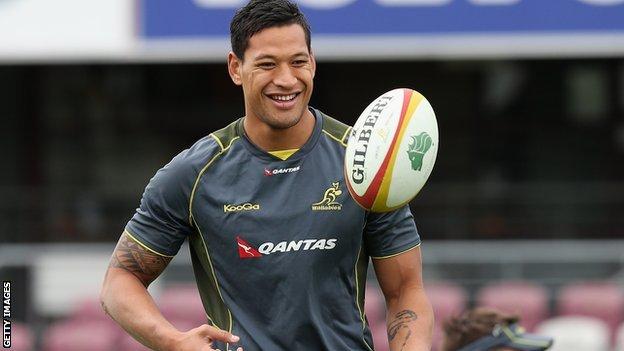 Ex-rugby league international Folau, 24, will start on the wing, having spent his first five months in union mostly at full-back.

"We know what a quality player he is," said Gatland. "But probably the hardest position to defend is winger.

"He will receive some sort of attention defensively to see how strong he is."

Folau turned out for Queensland in the State of Origin rugby league series and, aged 18, became the youngest player in Kangaroos history.

He then spent two years playing Australian Rules Football with Greater Western Sydney before moving to union with the New South Wales Waratahs this season.

Folau has played 17 games in all and scored eight tries in 14 Super Rugby outings, all of which came at full-back apart from one on the right wing.

"The Australians in the past have not been afraid to move their players around defensively to different positions," Gatland noted. "Whether they do that with him or not, or whether he runs from full-back on a few occasions, we are not sure.

"I think he has been very good for the Waratahs at 15. The first game I think he was a little bit lost, he defended on the wing.

"But he has had a bit of time and experience since then, and I am sure being in camp for three weeks they have worked really hard with him defensively as well."

They have never faced him before. He is a bloke that makes things happen when he gets his hands on the ball

Folau declared himself "very comfortable" playing on the wing, where he will have the experienced Berrick Barnes at full-back and outside centre Adam Ashley-Cooper in close proximity.

"It doesn't worry me," he said. "It is a very exciting time. It is going to be a challenging game for me personally and I have got to be switched on.

"This time last year I was playing [Aussie Rules]. Things change in a short time. I haven't regretted anything and Saturday night is going to be huge. I can't wait to get out there."

Wallabies coach Robbie Deans believes Folau could bring an extra dimension to the hosts' attacking game that could surprise the Lions.

"For Izzy it is not really a debut," said the New Zealander. "He has played international sport before. One advantage he has is that they have never faced him before.

"They have witnessed what he is capable of and will want to limit that. He is a bloke that makes things happen when he gets his hands on the ball. And it is fully our intent to get the ball in his hands."

Gatland, who named the giant George North in opposition to Folau on the Lions' left wing, concedes Folau will pose "a big threat" to the tourists with his aerial power.

"It has always been a massive strength for him, he is an incredibly talented footballer," he added.

"He is naturally gifted, is able to ride a tackle very well and he has the ability, particularly from his league background, to offload and get the ball away.

"I am pretty excited about the match-up between him and George North. It is almost worth the fare [ticket price] in itself. I think it will be pretty special."