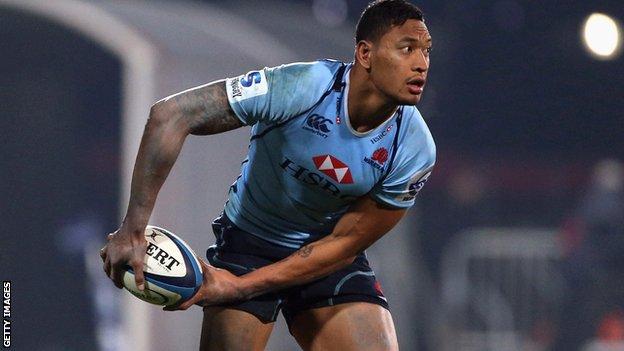 Australia have named three debutants for Saturday's first Test against the British and Irish Lions in Brisbane.

Christian Leali'ifano gets the nod over Pat McCabe at inside centre, while Ben Mowen starts at blind-side flanker.

Beale has only played one game of club rugby since he received treatment for alcohol-related problems after punching two Melbourne Rebels team-mates.

The versatile Berrick Barnes, who can also play at number 10 and centre, starts at full-back.

Folau, who as an 18-year-old was the youngest Australian to appear in a rugby league international, only started his first game of Super Rugby with the New South Wales Waratahs five months ago.

But his game-breaking ability sees him drafted onto the right flank, with Digby Ioane declared fit to start on the left wing after recovering from knee cartilage surgery last month.

The inclusion of Leali'ifano - ahead of the more direct McCabe - alongside the experienced Adam Ashley-Cooper suggests Australia could adopt a more expansive approach.

The 25-year-old Brumbies player will also offer a second kicking option alongside O'Connor, who has mostly played wing and full-back for the Wallabies but only one Test at number 10.

In the absence of Pocock and Smith, Michael Hooper - man of the match in Australia's win over England at Twickenham last year - gets the nod at open-side over fellow 21-year-old Liam Gill, who is on the bench.

Lock James Horwill returns as captain for his first Test in 18 months, having missed the entire 2012 season with a hamstring injury.