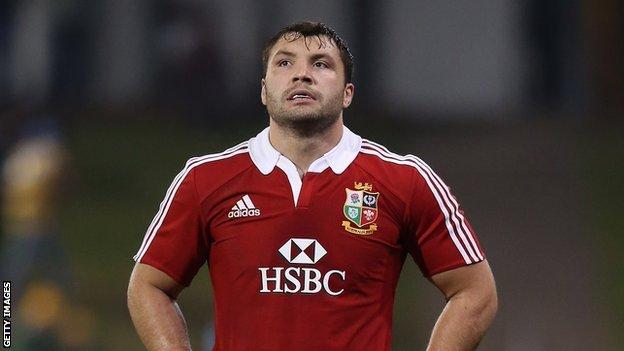 England prop Alex Corbisiero has been named in the British and Irish Lions starting XV for the first Test against Australia on Saturday.

The 24-year-old was not selected in the original touring party but was called up as a replacement for injured Irishman Cian Healy.

The coaches had a tough call because there are a lot of quality players out here. I am very excited and proud to be selected

There are eight Welshmen in the team, one short of the record of nine.

Mako Vunipola had been widely expected to be picked ahead of Corbisiero at loose-head after impressing on tour, but he must settle for a place on the bench.

Corbisiero has started only one game since his arrival from England's tour of Argentina, a 50-minute outing against the Combined Country XV, before replacement appearances against the Waratahs and ACT Brumbies.

"I just wanted to make the most of the opportunities I was given and try to put my hand up," said the London Irish prop, who will face Australia for the first time in his career.

"I have just tried to focus on my own game and make sure my set-piece is accurate and work hard around the park. The coaches had a tough call because there are a lot of quality players out here. I am very excited and proud to be selected."

Gatland said Corbisiero's superior scrummaging skills were crucial to his selection, conceding he had concerns that the Australians, coached by Robbie Deans, might have targeted Vunipola in the set-piece.

Who is Alex Corbisiero?

"No doubt Robbie Deans has looked at Mako technically at scrum time. Mako coming off the bench will give us a huge amount of impetus and we think that will be a big strength. Technically, we think Alex is probably a little bit sounder.

"Alex is also perhaps a bit more of a combination with Tom Youngs and Adam Jones. There's no doubt Mako is very unlucky but he will make a big impact off the bench."

The selection of Corbisiero aside, the starting XV is the one Gatland was expected to pick after a series of warm-up matches that featured five victories followed by a 14-12 loss to ACT Brumbies in Canberra on Tuesday, the Lions' first defeat by a provincial side since 1997.

Sam Warburton leads a team containing eight Welshmen, one short of the record of nine that featured in the first Test in 1971 and first and third Tests in 1977.

The captain is also one of eight players featuring in their first Lions Test, along with compatriots Leigh Halfpenny, Alex Cuthbert, George North and Davies, plus Irish fly-half Jonny Sexton and English front-rowers Corbisiero and Youngs.

Along with Mike Phillips and O'Driscoll, who starts his seventh Lions Test in the same city where he played his first 12 years ago, five of the pack also played in South Africa in the last Lions Test series.

Alun Wyn Jones and Paul O'Connell resume the second-row partnership that started the first Test in Durban in 2009 and which came to the fore again in Saturday's 47-17 victory over New South Wales Waratahs. Adam Jones, Tom Croft and Jamie Heaslip also played in the most recent series.

Despite the loss of the physically imposing Jamie Roberts and Manu Tuilagi, Gatland denied his midfield would lack a physical edge.

"I don't think Jonathan Davies at 105kg is a small midfielder," he said. "Just because he is not as tall as the other two, I don't see him lacking a physical element at all.

"We've also got George North coming in and our nine [Phillips] and 10 [Sexton] are both big half-backs too. What it does give us is a few more subtleties in midfield and we have got some pace and firepower in the team as well."

On the replacements' bench, Wales blind-side Dan Lydiate is preferred as back-row cover to Toby Faletau and Sean O'Brien.

Wales wing North starts after overcoming a hamstring problem, with compatriot Cuthbert deployed on the opposite flank in the absence of Tommy Bowe, who is recovering from hand surgery.

Christian Leali'ifano got the nod over Pat McCabe at inside centre, while Ben Mowen starts at blind-side flanker.