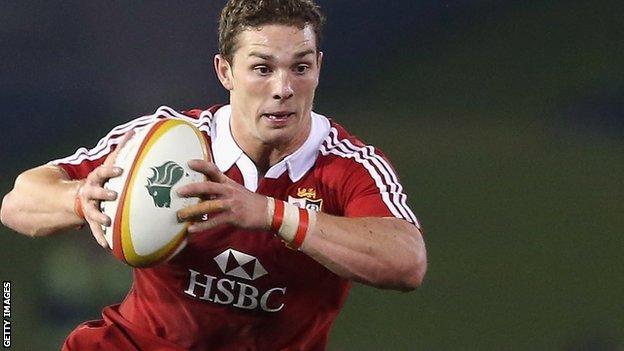 Rob Howley has warned Australia the best of George North is still to come as the Wales wing prepares for his British and Irish Lions Test debut.

The Lions' attack coach is buoyed by having his most potent attacking weapon available for Saturday's first Test.

"It is great to have someone of his physicality, power and speed," said Howley before the Brisbane opener.

"We have only seen glimpses of George so far. He is probably one of the best athletes I've been involved with."

North, who only turned 21 in April, scored two tries on his Scarlets debut in 2010, and two in his first Test for Wales against South Africa as an 18-year-old.

The 6ft 4in, 17st 6lb giant was passed fit on Wednesday just eight days after suffering a grade one hamstring tear in the Lions' 64-0 romp against a Combined Country side, in which he scored two tries.

"He can change direction very quickly, he has a great step and speed, and when you are able to bring him into those channels at 10, 12 or 13 he is pretty instrumental," said Howley, who has supervised North's development in his coaching roles with Wales.

"I remember his debut and he had 21 or 22 touches. His work-rate is phenomenal. You want your best players on the ball as often as possible, and he works tirelessly at his game.

"It is good for the Lions to have someone like George."

North has played five Tests against Australia in his short career already, but has yet to finish on the winning side.

He is one of eight players set to start a first Lions Test when head coach Warren Gatland confirms his side at 03:00 BST on Thursday.

North's Scarlets team-mate Jonathan Davies could be one of them with Manu Tuilagi only "touch and go" in his recovery from a nipped nerve in his neck and Jamie Roberts ruled out after injuring his hamstring in the 47-17 victory over the New South Wales Waratahs last Saturday.

"Jamie has progressed a significant amount from where he was," reported Howley. "He ran this afternoon and came through that. It is how he progresses in the next couple of days. We will take a decision next week but are hoping he will be fit for second Test selection."

The Lions permed four different combinations from the four centres in the original squad in the first five games of the tour, before fielding the emergency Brad Barritt-Billy Twelvetrees partnership in Tuesday's 14-12 defeat by ACT Brumbies.

The only pair from the initial quartet who have not played together are Brian O'Driscoll and Davies, who may now start the first Test together.

While the absence of both Roberts and Tuilagi may force a tweak in the Lions' tactical approach, Howley is confident that whichever combination plays in the three-match series, the tourists can adapt their game-plan accordingly.

"I think we have got the ability to play a gain-line game, or a passing game with a lot of magic in there," he added.

"I am looking forward to the combinations and mix that is going to come in the next few weeks. We need to create and score tries. I think we have scored 27 so far [it is actually 33], and there's been a lot of cute passing, a lot of good angles.

"It is important we keep that going."