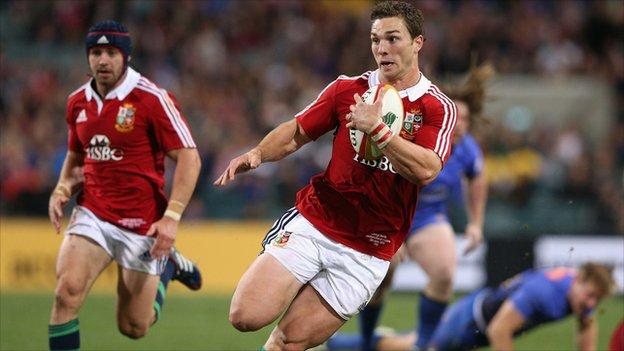 Wallaby scrum-half great George Gregan says George North being declared fit is a "real shot in the arm" for the British and Irish Lions.

The Wales wing had been struggling with a hamstring but has been passed fit for the first Test against Australia in Brisbane on Saturday.

Gregan, the former Wallaby captain, is the most capped rugby international with 139 caps for Australia.

"It is a real shot in the arm for the Lions, that is for sure," said Gregan.

George is a wonderful player and can do so many things from the back of the field, off set-piece and his running is so dynamic

Scrum-half Gregan was part of the Wallabies side which beat the Lions 2-1 in the Test series back in 2001.

North, 21, has missed the last two matches due to a hamstring problem.

But Lions assistant coach Rob Howley said North was available for the weekend, although centre Jamie Roberts is likely to miss out with a leg injury and his fellow centre Manu Tuilagi is "touch and go" with a shoulder problem.

Ireland wing Tommy Bowe should be ready for the second Test on 29 June as he recovers from a fractured bone in his hand.

Gregan is one of the game's most decorated players, including winning the World Cup in 1999, and believes North's availability is a major boost for the tourists.

"It is great news for the Lions," said Gregan.

"People are talking about the disappointment of their last result but they will narrow their focus going into the Test match.

"Then you get the positive news of George North is fit and ready to play in the first Test. He is a wonderful player and can do so many things from the back of the field, off set-piece and his running is so dynamic."

The defeat to the Brumbies in Canberra on Tuesday saw the 2013 tourists lose their unbeaten record. It was the first time the Lions had suffered a loss to a provincial side since 1997, and the first time in Australia since 1971.

Despite that reverse, Gregan believes the Lions are favourites for the Test series but is convinced it will go right down to the third and final Test in Sydney.

"I would have said, without a shadow of a doubt, the Lions... [are favourites], but they have had some injuries to their key players," Gregan said.

"I still favour them because of the match conditioning and the games they have had going into the first Test. That will hold them in really good stead because the Wallabies haven't played since December last year and they are going to be playing catch-up in that regard.

"But there are some quality players in the Wallaby team and it will be a really tight series. I think it will be one apiece going into Sydney."