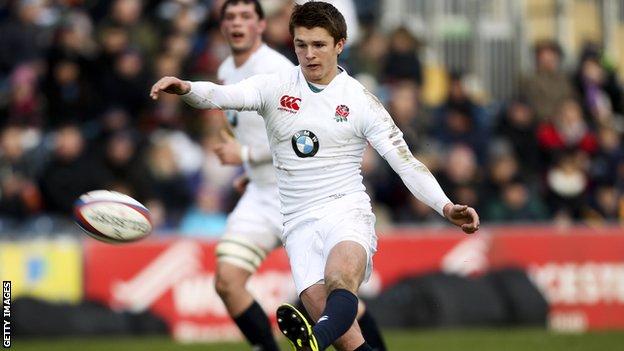 England Under-20s must be on top form if they are to win the Junior World Cup for the first time by beating Wales on Sunday, says fly-half Henry Slade.

"They're a really tough team and we've got to be right on the money," Exeter's Slade told BBC South West Sport.

"We played them in the Six Nations decider in March and that was tough."

England, who beat Wales 28-15 in Colwyn Bay, will face their rivals again in the French town of Vannes on Sunday.

New Zealand won the first four Junior World Cups, beating England in the final on three occasions, and have only ever lost one, to South Africa last year.

And Slade, who after says beating the Kiwis by 12 points is one of the highlights of his fledgling career.

"It didn't feel that convincing, it was closer than the scoreline suggests, in that second half we were defending for our lives really," he said.

"We got an interception try in the first half and that probably took us away from them a bit.

"But credit to our boys' defence, it shows the great team spirit we have in the camp to keep working when our backs were against the wall, especially in the first 20 minutes of the second half.

"That was the first time they haven't reached the final, so it was an awesome effort from our lads considering how good that Kiwi team was.

"It's awesome to have two northern hemisphere teams in the final for the first time."