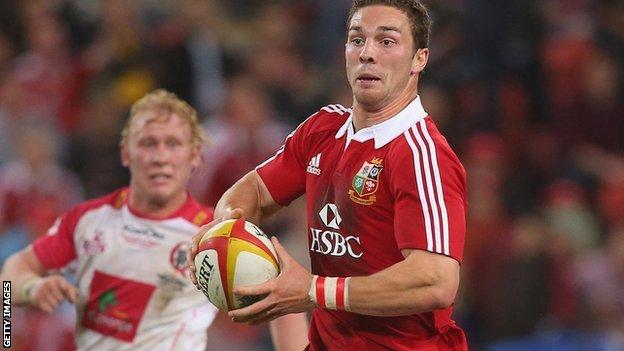 British and Irish Lions wing George North has been passed fit for the first Test against Australia on Saturday.

The Welshman, 21, has missed the last two matches due to a hamstring problem.

But Lions assistant coach Rob Howley said North was available for the weekend, adding: "I've not seen him in a better physical shape."

Jamie Roberts is likely to miss out with a leg injury, however, while his fellow centre Manu Tuilagi is "touch and go" with a shoulder problem.

Irish wing Tommy Bowe should be ready for the second Test on 29 June as he recovers from a fractured bone in his hand.

But Shane Williams, who joined the tour as a stop-gap measure and suffered a groin strain 25 minutes into Tuesday's defeat against ACT Brumbies but played on for the full game, has now left the squad.

The Lions lost their 2013 unbeaten record with a 14-12 loss in Canberra. It was the first time the side had suffered a loss to a provincial side since 1997, and the first time in Australia since 1971.

But Howley, part of the Lions squads that lost matches before the first Tests in South Africa - to Northern Transvaal - in 1997 and in Australia - to Australia A - in 2001, believes the setback will have a positive effect approaching Saturday's first Test in Brisbane.

"It was tough for those lads coming in last night but when you lose a game it can have a galvanising effect on the squad and that has been very apparent in the last 12 hours or so," he said.

"It is important this team and squad come together now. I am sure that everyone will back the Test 23 that takes the field on the weekend."

Howley paid tribute to North's powers of recovery from a grade one hamstring tear suffered against a Combined Country XV in Newcastle last Tuesday.

"He has been icing his hamstring continually throughout the day," Howley said. "His whole focus has been getting himself right. It is completely different from other tours we have been on, the professionalism among these talented players.

"They are preparing for the biggest game in the calendar year and their diligence and professionalism can only be admired from within the camp.

"It shows how much they want to wear that red jersey."

Given North's form in his outings against the Western Force, Queensland Reds - when he replaced Tuilagi for the last hour - and the Country XV, his availability leaves Alex Cuthbert, Sean Maitland and Simon Zebo effectively fighting for the one remaining wing berth.

"George was up bright and early this morning and came through a fitness test," Howley reported. "It is a huge fillip and a real morale booster to have someone like him fit."

Folau, a recent convert to rugby union after previously excelling in rugby league and Australian football, has impressed at full-back for New South Wales Waratahs but is set to start on the right wing, with Berrick Barnes at 15 and Kurtley Beale on the bench.

Lealiifano is poised to get the nod ahead of the more direct Pat McCabe at 12, while Mowen is likely to join Michael Hooper and fit-again number eight Wycliff Palu in the back row.

Wallabies coach Robbie Deans is scheduled to confirm his line-up early on Thursday.