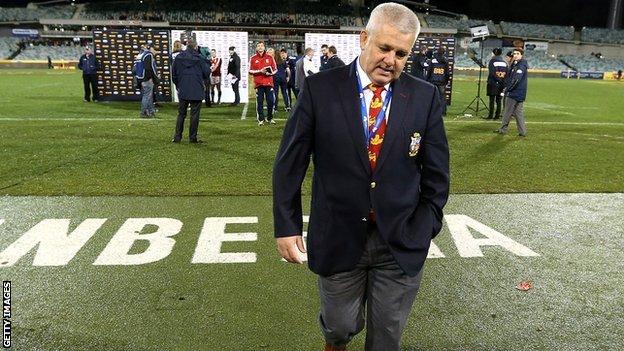 British and Irish Lions coach Warren Gatland admitted his side got a reality check as their unbeaten record ended with a 14-12 loss to ACT Brumbies.

The tourists had talked about becoming the first Lions party to win every match, but that bid ended in Canberra.

While the starting XV contained no-one likely to start the first Test, it was a disjointed and dispiriting display.

"We were building momentum, but it's not the worst thing when you get a bit of a reality check," said Gatland.

"You have a knock, you take your disappointment and it is how this group of players responds now. We will see on the weekend."

An error-strewn performance included eight lost line-outs as the Lions also failed to score a try for the first time since the first Test in New Zealand in 2005.

"We were disappointed at half-time," Gatland said. "We just felt we didn't have the urgency and intensity we needed. It was a bit better in the second half but it's obviously disappointing. All credit to the Brumbies. They frustrated us and it was a tough day at the office.

"It was not the easiest conditions and the Brumbies were really good at what they did. They didn't really play any rugby but kicked a lot of ball and competed really hard at the breakdown.

"It is important we learn from that experience and make sure we are better for it."

Captain Rory Best admitted the Lions, with 580 caps in their side, were out-muscled by a Brumbies outfit containing just two capped Wallabies.

"Everyone is very disappointed," said the Ireland hooker, whose line-out throwing did little to ease the tourists' nerves. "We knew it wasn't going to be easy but we came here confident we could win.

"We talked about not just matching their physicality, but beating it. But we didn't even match it. At the breakdown they really smashed us and put pressure on the line-out.

"Mini units just fell apart and we lacked a bit of composure, which was very disappointing. We didn't front up and match their physicality."

Brumbies coach Jake White, who led South Africa to World Cup victory in 2007, said the victory was a "massive result" for his young side and for the province, which became the first since Northern Transvaal in 1997 to beat the Lions.

"It is as high as it gets," he said. "I have won junior and senior World Cups, but to beat the Lions, especially the way we did it, has got to be as good as it gets in rugby union.

"Some great teams have played for the Brumbies and this group now have their own chapter in the Brumbies' history."

White believes the result may also boost the Wallabies as they prepare to face the Lions in the first of the three-Test series in Brisbane on Saturday.

"A couple of days ago I would have said it wouldn't make much difference," he added. "The Lions know what is coming and what the expectation is.

"But I would think the boys in the Wallabies camp would now look at that and think 'it is do-able, it is possible'."