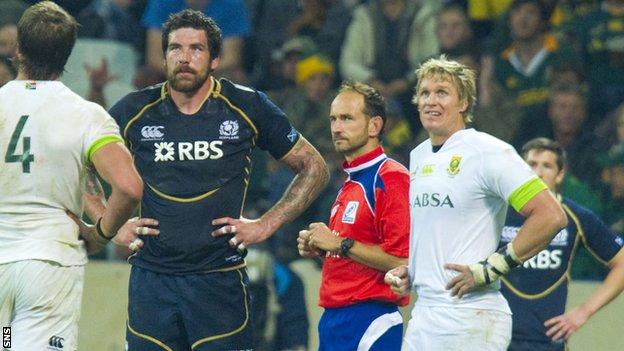 Perceptions can be altered by a number of things - not least the commentary during a game.

Having found a link to the game with Spanish voices filling my ears I was able to make up my own mind on how the game was going. It was interesting watching a replay later with the South African commentary.

Let's just say that the game has become very open to opinion and interpretation.

The first half was played at great pace and intensity with an obvious reaction to the previous week's 27-17 loss against the Samoans apparent.

In defence, there was bite in the tackle and the line was moving forward, cutting down the amount of time the South Africans had on the ball. The work of the second man in the tackle - noticeably by Alasdair Strokosch, Alex Dunbar and Matt Scott - to disrupt speed and quality of ball was impressive and technically spot on.

The attack was varied and generally accurate. There was a threat of an offload or pass on most ball carries which prevents the opposition from 'gang tackling' too much (due to the second threat), leading to 1v1 tackles and quicker ball.

Greig Laidlaw was given some great possession to work with and made the most of it. There generally seemed to be a lot more clarity in movement and decision making throughout the side.

The TMO description itself, for me, doesn't provoke thoughts of a yellow card. I guess I just question why Hamilton did it and ran the risk?

So, with all these positives in the first half, how was the game eventually lost 30-17?

The first five minutes of the second half started off in similar fashion to the first half with a fantastic and well-deserved team try by Dunbar after another impressive inception by debutant Tim Swinson and some quick, soft hands by Scott.

Having previously lost stand-off Jackson to injury, whom I thought had defended superbly during the first quarter, his replacement Peter Horne then succumbed to a nasty looking knee twist.

Rugby players are a brave breed. I remember Eoin Redden trying to play on during the Six Nations last year after breaking and dislocating his ankle only to collapse in a heap.

Horne was obviously in real trouble after an initial twist of the knee - with the physios suspecting the worst.

However, with play on-going and a complete examination of Horne not permitted by the referee, Romain Poite, Horne stood up and attempted to join the back-line only to suffer the same fate as Redden did, 15 seconds later.

Disruption of the back-line, therefore, will have had an impact on the team in that second half. Losing two stand-offs isn't ideal.

However, Scotland were fortunate with Laidlaw's previous experience in that key position that all was not lost when Henry Pyrgos entered the field.

One of the factors creating the shift of momentum towards the South Africans came about from discipline, or lack of.

Yes, there were some harsh calls by the referee - made no easier by the fact that so many rulings on the breakdown are based on interpretation.

You could give a penalty at every breakdown if you look closely enough. But it is the soft penalties, such as the two early engagements at scrums that frustrate.

To state the obvious, the sin-binning of Jim Hamilton was key. Scott Johnson didn't like the call of a yellow card as he believed it wasn't merited.

"Blue five pushed a white player in the face, open hand. Recommendation, yellow card," were the words of the TMO.

In full speed, the offence looked no more than a penalty (which in itself was still ill-disciplined) but slowed down in super slow-mo it looked badly aimed at worst, but hardly aggressive or dangerous.

The TMO description itself, for me, doesn't provoke thoughts of a yellow card. I guess I just question why Hamilton did it and ran the risk?

The South Africans began to impose themselves a bit more as the game progressed. They resorted to playing a bit tighter, driving lineouts and playing field position with high contestable kicks, winning the aerial battle.

Scotland tired but were still within touching distance of that win until the final minutes.

The Scottish gameplan of 'heads up' rugby caused a metronomic and rather robotic South African XV problems, but in the end their irrepressible strength and power proved too much.

After the loss to Samoa the backs were to the wall. There needed to be a reaction and there was. But Scotland have never had a problem fronting up when everyone is against them and no-one gives them a chance.

It's games like Italy next week, after this positive showing against the South Africans, that will show if indeed Scotland have made a step forward.