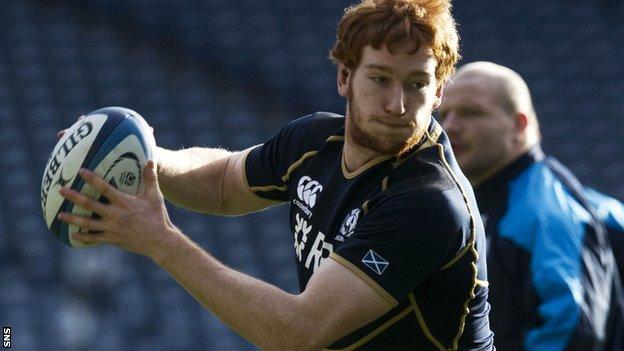 Rob Harley has been called into the Scotland squad as injury cover after fellow forward Jim Hamilton returned home to be with his expectant wife.

Scottish Rugby says that, with his second child due, lock Hamilton had agreed with coach Scott Johnston that he would leave the squad at this point.

Harley becomes the fourth player to join the squad as a result of injuries picked up on their South Africa tour.

He could add to that tally in Scotland's final game of the quadrangular tournament when they face Italy in Pretoria on Saturday.

Harley said: "It's amazing to be called-up to the Scotland tour. I came in last week for pre-season training with Glasgow and wasn't expecting to get the call, so it's a bit of a shock but very exciting.

"I've never been out to South Africa before, so it'll be good to go over there and hopefully I'll be able to make the squad for the game on Saturday.

"The game against Italy in the Six Nations was my first start for Scotland, so I know a little about them.

"But I'm sure it'll be a different game over in South Africa with different conditions.

"I'm excited about the challenge and I hope I get the chance to show what I can do."

The other three replacements called into the Scotland squad are team-mates of Harley's in Glasgow - Jon Welsh, Fraser Brown and Gordon Reid.

Harley joins the squad the day after two more of his Scotstoun colleagues, returned home after picking up injuries in Saturday's 30-17 defeat by South Africa.

Scotland team manager Gavin Scott explained: "In light of the injury sustained by Ryan Wilson in Nelspruit, which ended his tour and the fact we were already down in the back-row following the injury departure of Kelly Brown the previous week, we've decided to call on Rob."