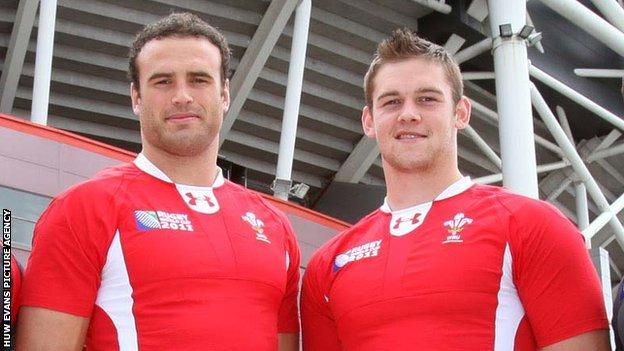 Racing Metro 92 have confirmed the signings of Wales and Lions stars Jamie Roberts and Dan Lydiate.

The Welsh pair had been linked with the Paris-based club but Racing have now announced the signings on their website.

The transfer window for French clubs to sign new players for the forthcoming season closed on 15 June.

The Wales internationals had already announced their intention to leave Welsh regions, but did not reveal their destinations at the time.

Both players are currently on tour with the British and Irish Lions in Australia.

They are joined by fellow 2013 Lion Jonathan Sexton, the Irish fly-half, and a host of other big names as the club from the French capital puts a squad together in a bid to win the French championship.

Sexton, 27, will reportedly be the highest-paid player in French rugby next season after his move from Pro12 champions Leinster this summer.

Racing are bankrolled by multi-millionaire owner Jacky Lorenzetti, who is intent on building the strongest team in Europe.

Newport Gwent Dragons flanker Lydiate and Cardiff Blues centre Roberts had been targeted by a host of leading clubs since deciding not to sign new contracts with their regions.

Lydiate, 25, was named the player of the tournament as Wales clinched the Six Nations Grand Slam in 2012, but an ankle injury prevented him from adding to his 27 caps in this season's campaign as the champions retained their title.

He recently returned to action and was a shock selection for the Lions tour of Australia this summer.

Roberts, who has won 53 caps, rose to prominence during the last Lions tour in South Africa fours years ago, where he won the player of the series award.

Also leaving Wales is Grand Slam winner George North, who will swap Scarlets for Northampton Saints in the English Premiership.

Gethin Jenkins is returns to Wales to re-join the Blues after just one season with Top 14 leaders Toulon.

The impending loss of North from the Welsh game, adding to the other high-profile exits, sparked the current antagonism between the four regions and the Welsh Rugby Union.

Both sides want changes to ensure the best players stay in Wales, but there has been little progress or even discussion over recent weeks on possible solutions.