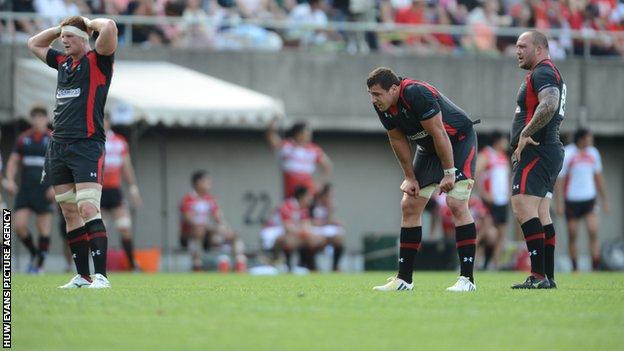 It is in the job spec, to ask the tough questions sportsmen and officials least want to answer.

This one I got wrong, luckily however the camera had yet to start rolling.

The Welsh rugby teamWales has just lost to Japan for the first time in its history, and one of the eight tour debutants is chaperoned towards the BBC crew.

"Thanks for coming over," I tell him. "Are you happy to do this interview?"

It is a statement of intent without any hint of a question, and Rhys Patchell gives the response that my insensitivity deserves.

Patchell, winning his second cap, has just tasted international defeat for the first time but is expected to front up and deal with any question I throw at him.

It seems a little unfair, exploitive even, to ask for such accountability from an 20-year-old but the challenges of modern professional rugby extend beyond the 80 minutes played on the pitch.

It is in the job spec.

Despite being without almost 30 front-line personnel, the tour to Japan was run as professionally as any other, with players expect to follow protocol from the fulfilment of media duties to nutritional and physical management.

The idea is that to replicate the preparations of a major Test match so that when the main event becomes reality the process is already second nature.

Some of the fresher faces had been drafted in from academies and semi-professional environments and privately the coaching staff admit that they'd taken a punt on some of the selections.

The hope being that an insight into the standards set at the top level might help polish a rough diamond or two.

And following a gritty victory in the first Test in Osaka the talk around the camp was of maturing group of young players who were gelling as the days passed by. It was expected that the second Test would see a marked improvement in the performance and consequently the result.

That of course didn't happen, with coach Robin McBryde defending his decision to give a summer break to experienced campaigners such as Ryan Jones, James Hook and Paul James.

McBryde argues that the success of this tour should be measured in the long term with the amount of players that make the transition to international regulars.

The counter arguments are obvious. Should Welsh caps be handed to players who are clearly some distance away from the required standard?

And ultimately, as the team lost a Test to a far inferior rugby nation, can a defeat ever be justified?

It is a given that some of those who featured in the Far East might drop off the radar in years to come but four years ago on the tour to North America future Lions Sam Warburton, Richard Hibbard and Jonathan Davies all got their first taste of international rugby.

How would we now reflect on that tour had Wales lost against USA or Canada?

Back at the Chichibunomyia Stadium in Tokyo, Rhys Patchell answers courteously, with maturity that defies his tender age. He tells me that the pain of defeat in particular has only strengthened his resolve come pre-season training in a month's time.

He won't forget his fortnight in Japan in a hurry, which is not necessarily a bad thing.