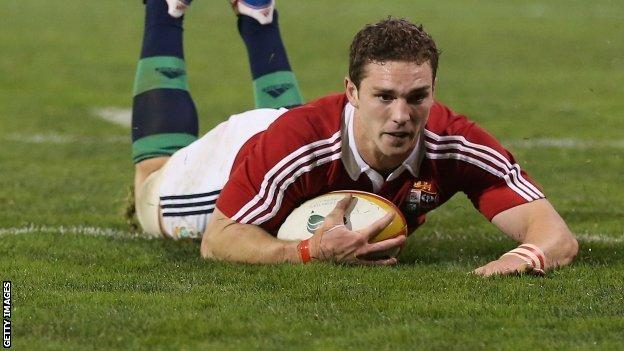 British and Irish Lions wing George North is rated as "less than 50-50" to be fit in time for the first Test against Australia next Saturday.

The Welshman, 21, missed the 47-17 victory over New South Wales Waratahs on Saturday with a hamstring problem.

"The hamstring is still tight, he is still being treated," said head coach Warren Gatland.

Gatland's back division was dealt another blow when North's Wales team-mate, centre Jamie Roberts, suffered a suspected hamstring injury in Sydney against the Waratahs.

"Fingers crossed with Jamie. He has never pulled a hamstring before - he is not 100% sure whether that is the injury.

"The forwards seem to be holding themselves together, and unfortunately the backs are the ones who are taking all the knocks. It is something I haven't really experienced in the past."

In brighter news, Gatland added that the Ireland wing Tommy Bowe, who broke his hand playing against Queensland Reds on 8 June, has "an outside chance" of being fit in time for the first Test in Brisbane.

Gatland has brought England trio Christian Wade, Brad Barritt, and Billy Twelvetrees into the squad as injury cover, while 36-year-old Shane Williams, who retired from the international game in December 2011, has been added to the team to play the ACT Brumbies in Canberra on Tuesday.