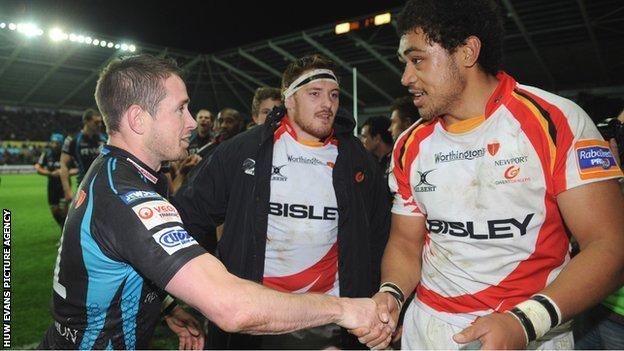 Toby Faletau is delighted that he will be able to play with ex-Wales team-mate Shane Williams at least one more time.

Williams, 36, was a shock British and Irish Lions call-up because of injuries and will start Tuesday's tour match against ACT Brumbies in Canberra.

The former Ospreys wing is currently playing in Japan after quitting international rugby in December 2011.

"He's just such a legend I guess and it's good to have him back," said number eight Faletau.

"I was just shocked to be honest, but it's great to be able to take the field with him again."

Williams plays for Mitsubishi Dynaboars in Japan and was already heading to Australia to work as a radio pundit for the three-Test series against the Wallabies, which starts on Saturday in Brisbane.

He scored 58 tries in 87 games for Wales, including one on his final Test against Australia, and two more tries for the 2009 British and Irish Lions against South Africa. Williams was also a Test Lion in 2005 in New Zealand.

Faletau, who starts against the Brumbies, believes that Williams will be able to reproduce that quality for the Lions, who have also called up England wing Christian Wade and centre Brad Barritt because of injuries.

"It's been a while since he [Williams] retired from international rugby, I haven't really spoken to him since, just a few messages now and again," Faletau said.

"He's still playing rugby and he'll have no problems stepping up, it's just good to have him here.

"There's two good wingers out there, so we'll just give them the ball and hopefully they'll do the rest."

Williams will only be with the Lions squad for the midweek game and head coach Warren Gatland has said there was no suggestion that the 2008 IRB World Player of the Year will be considered for the Test series.

But Gatland has given encouragement to the other players who will face the Brumbies that there are still places to be won in the 23-man Test side to be selected for next Saturday's Wallabies clash in Brisbane.

Even though the start of the Test series is looming, Faletau says that will not distract those players selected to face the Brumbies.

"I'm not sure really what to expect, but it'll probably be the same as the Reds and the Waratahs. It's going to be a tough one," Faletau added.

"It's just taking one game at a time and it's not really difficult to concentrate on Tuesday's game."