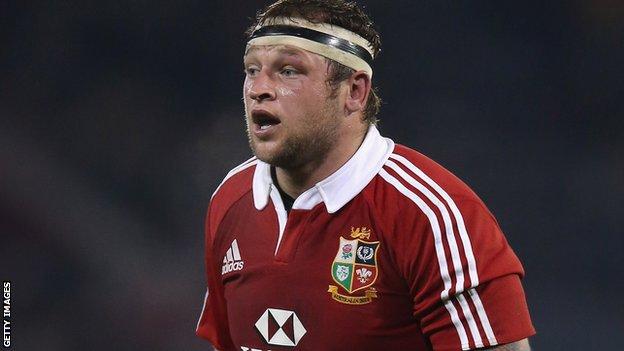 The 27-year-old Glasgow prop was a late call up to the squad and came off the bench in last weekend's win over Queensland-New South Wales Country XV.

He is joined by fellow Scots Stuart Hogg and Richie Gray.

Hogg gets a second outing at stand-off, while lock Gray has recovered from a shoulder injury.

Those selected to start will know their chances of making the XV in the first Test against Australia in Brisbane are remote.

And that leaves winger Sean Maitland as the only Scot in with a shout of making Warren Gatland's opening side.

With the travelling squad hit hard by injuries, Hogg is almost certain to make the bench against the Wallabies since he can provide cover at full-back, centre and stand-off, while Gray appears to be behind Alun Wyn Jones and Paul O'Connell in the pecking order.

Grant, who was called up after props Cian Healy and Gethin Jenkins were sent home due to injuries, will need to impress against ACT Brumbies to have any chance of being involved in the first Test.

Former Wales wing Shane Williams has been drafted into the Lions team for Tuesday's clash with the newly-crowned Australian Conference Champions.

Wales' record try-scorer, the 36-year-old is currently playing in Japan after quitting international rugby in 2011.

The surprise call-up sees the Japan-based player feature in a team that also includes England backs Christian Wade and Brad Barritt, who have been called up as injury cover and will arrive in Australia on Monday.

Ireland's Rory Best will be captain.