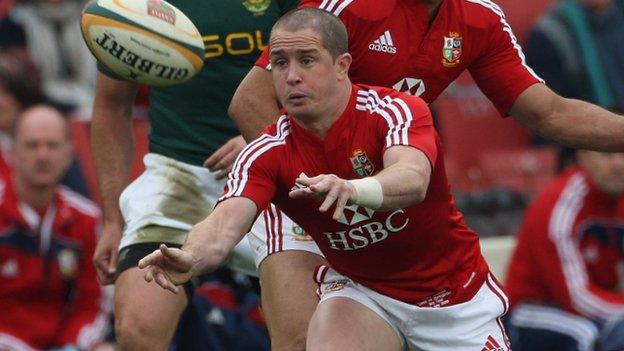 "We knew this gig was all about thinking on the hoof," said Lions assistant coach Graham Rowntree on Friday. "Things change late, people become unavailable, you just have to get on with it."

Barely 36 hours later, after a stirring 47-17 victory over the New South Wales Waratahs in Sydney, the Lions brains trust reacted to unfolding events with a spectacular leap into left field.

On the face of it, whistling up a 36-year-old - albeit 2008's World Player of the Year - from semi-retirement in Japanese rugby to join the squad for 48 hours and play a game with barely time to say "konnichiwa" beforehand, could be considered a panic measure.

It is not quite in the same class as drafting former Scotland scrum-half Andy Nicol onto the bench for the third Lions Test in Australia in 2001, having been leading a supporters' tour 48 hours earlier, but was still a stunning development.

The SOS to Shane Williams has already caused plenty of heated debate judging by the response on social media and this website.

The reality is the Lions have come up with an expedient solution to a practical problem.

With Jamie Roberts, George North, Manu Tuilagi, Brian O'Driscoll and Tommy Bowe all in varying states of injury diagnosis, treatment and recovery, backline bodies are thin on the ground. The ones that are still operational, are in danger of being run into it.

With two of the four original wings and three of the four centres unavailable, and Alex Cuthbert and Sean Maitland having both played three full games - and in Maitland's case, two in the last five days - already, reinforcements were required for Tuesday.

Hence the call to Christian Wade in Argentina, Brad Barritt in the United States, and Shane Williams in Japan. The latter, a 10-hour flight away and already on his way to Australia to work as a radio pundit for the Tests, was an attractive short-term bet.

"We spoke to Shane with the proviso that he comes on Monday, trains and plays on Tuesday, and leaves on Wednesday, and he is perfectly happy with that," said head coach Warren Gatland.

"We are just trying to be pro-active in terms of looking after players, and giving potentially our Test side the best possible chance of being fit with everyone fresh for next Saturday."

And there's the bottom line. Remaining unbeaten for the whole tour is a stated target of captain Sam Warburton, but no-one will worry in years to come if the Lions lose to the Brumbies on Tuesday and then beat the Wallabies in the Test series.

Williams may no longer be playing elite rugby, and has not played Test rugby but he is hardly a novice. He knows the Lions environment and many of the players from the last tour in 2009, which he finished by scoring two tries in the 28-9 final Test victory against the Springboks.

As a one-off, who couldn't be excited by the prospect of the veteran, twinkle-toed show-stopper on one wing, and the scintillatingly quick Wade, 22, on the other?

So have the Lions been decisive in their decision-making, or are they trying to extricate themselves from a mess of their own making?

Concerns were raised when the original squad was announced at the lack of midfield cover - with only two fly-halves and four centres selected.

The issue of Jonny Wilkinson's availability - or lack of it - muddied the waters, when in reality it was always likely the Lions would need an extra body, or a 38th member of the squad (as it is they are up to 41, and counting), with only 16 backs - and 21 forwards - in the original party.

"When you look back on it, we might think 16 backs wasn't enough, but you are only going on past experiences," Gatland said on Sunday.

As he has pointed out, if you bring people on tour, you are obliged to give them a game for the sake of squad harmony, at the expense of more time for your optimum combinations. It is a tricky balance.

The other point is that if someone picks up an injury that rules them out or several weeks, summoning a replacement is straightforward.

In the cases of Rob Kearney, who made a belated tour bow on Saturday two weeks after the opening game, and Bowe, who is likely to be fit for the second Test after initial reports suggested he would miss the rest of the tour, the Lions decided that keeping two quality players on tour could ultimately benefit them come the Test series. They may well be proved right.

The knock-on effect was a greater work-load in the early matches for the likes of Maitland, Cuthbert and Stuart Hogg.

The more pressing issue for Gatland now is who he will be able to call on for on Saturday. Leaving Roberts aside, he reported that "one or two are not far away".

If Tuilagi recovers from a sore shoulder in time, the suspicion is Gatland would prefer to retain a physically imposing, hard running presence at inside centre, if Roberts is ruled out.

But given the superb form against the Waratahs of Jonathan Davies, who played at 12 against the Queensland Reds seven days earlier, there is a strong case for the Welshman starting anyway.

"The way we operate there is a lot of interaction and changing in positional play between 12 and 13," Gatland said. "We have played him there on this tour and the beauty of it is he gives us a left-foot kicking option as well."

If the Lions were confident about North's chances, they may have given Simon Zebo another start on Tuesday. As it is, there is a good chance of the Irishman being in the Test match-day 23 next Saturday, after an impressive opening gambit in Sydney.

If North is ruled out, it appears a straight choice between Zebo and Sean Maitland on the left wing, with Alex Cuthbert likely to start on the right.

Elsewhere, selection issues were mostly settled by Saturday's events. Barring further mishaps, full-back Leigh Halfpenny and half-backs Jonny Sexton and Mike Phillips will all start in Brisbane, while it would be a surprise if the pack that started on Saturday are now not retained en bloc.

Richard Hibbard's appearance on the bench on Tuesday suggests Tom Youngs has done enough to edge the hooker's argument, even if Hibbard's extra scrummaging ballast may still come into play.

Like Youngs, Mako Vunipola's extraordinary progress this season is set to be similarly rewarded, with Adam Jones a shoo-in at tight-head. Alun Wyn Jones and Paul O'Connell - the first Test pairing in South Africa - both cemented their spots with colossal performances against the Waratahs.

The back row will still cause some discussion, particularly Dan Lydiate if the weather turns wet in Brisbane, but Tom Croft - with the pace and power he showed in scoring his try, and his line-out presence - offers the Lions another dimension.

Warburton, in only his second game after seven weeks of inaction, still looked slightly off the pace at times, but his work around the breakdown - the Lions won 14 turnovers - has probably spared Gatland an awkward decision about his captain, whatever Justin Tipuric might do on Tuesday.