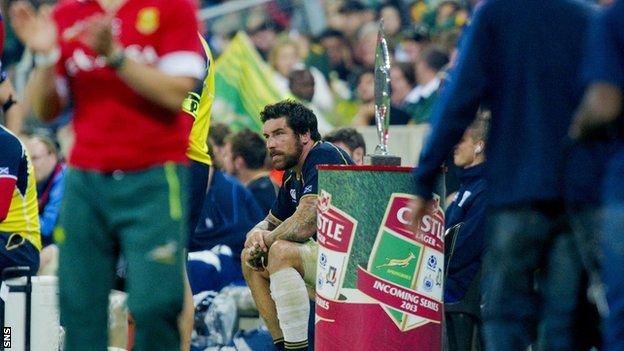 The Springboks moved into a second-half lead shortly after Hamilton had been yellow-carded for a push into the face of Eben Etzebeth.

"That was too big of a penalty for what it was and I'm really, really disappointed," said Johnson following the 30-17 loss in Nelspruit.

"It really spoiled the Test match. It should've been an epic."

The Scots were much improved following their tour-opening 27-17 loss to Samoa and will complete the series against Italy next week.

Johnson believed Scotland to have been the "better team" and praised the contribution of debutant Tim Swinson as well as try-scoring centres Matt Scott and Alex Dunbar.

"It was brave and I'm really proud of the effort," he explained.

"Everything that we did well tonight was at the back end of quality tackle work. Our poor work was when we were slightly off.

"We've got to be passionate about this. Scotland want an identity? That's our identity. Our identity is at the tackle work. That's it, it's really, really simple.

"We get that right, we've got good rugby players that can compete on any stage so, mark my words, that's where we're going."