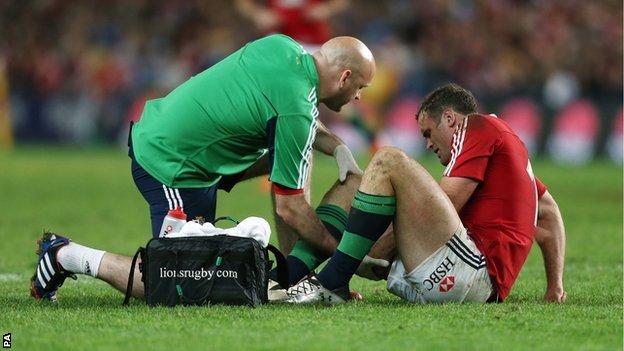 British and Irish Lions centre Jamie Roberts is set to miss the first Test against Australia after being rated "a grave doubt" for the match.

The Welshman, 26, sustained an injury to his right leg during the Lions' 47-17 win over New South Wales Waratahs.

"Jamie is a grave doubt for this week - there is no doubt about that," Lions team doctor James Robson said.

But wing George North, who had been considered "less than 50-50" to be fit, is making encouraging progress.

Manu Tuilagi has been struggling with a shoulder problem, but the England centre is also in contention to face Australia in Brisbane on Saturday.

However, Irish wing Tommy Bowe is "highly unlikely" to be fit after fracturing a bone in his hand.

Roberts, a qualified doctor, hobbled off against the Waratahs on Saturday clutching the back of his leg.

"You only had to see how much discomfort he was in at the weekend," added Robson. "However, further assessment will be made later in the week as to his availability going forward."

With Roberts almost certainly ruled out and Tuilagi attempting to regain full fitness, head coach Warren Gatland may have to revisit his centre strategy.

Brian O'Driscoll is expected to fill the outside centre slot and Gatland could play Jonathan Davies alongside the Irishman against the Wallabies if Tuilagi does not make it.

With uncertainty over selections in the centre, Gatland received a boost with the news that wing North is making significant progress after a hamstring problem and could be in contention.

North missed the game in New South Wales and Gatland had been pessimistic about the 21-year-old Welshman's prospects of being available for the first Test.

But Robson said: "George is an exceptional character and has worked really hard. He is back to running.

"An accurate assessment of his availability for selection will take place on Wednesday, but at the moment I think he is doing very well."

The Lions face the Brumbies in Canberra on Tuesday, with Gatland set to announce his team for the first Test on Thursday.