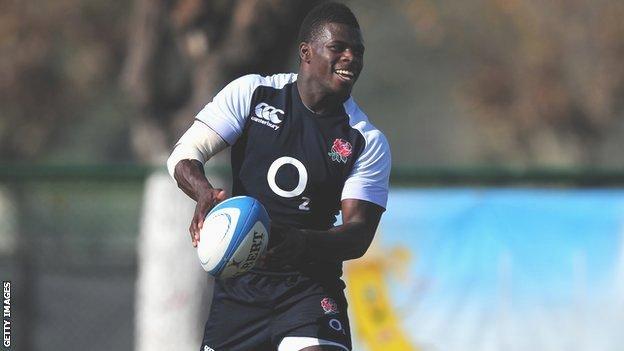 England's Christian Wade and Brad Barritt have been called into the British and Irish Lions squad.

The duo will provide injury cover with wing Wade arriving from Argentina where he is touring with England and centre Barritt from the United States.

Lions coach Warren Gatland said: "Some players are obviously having ongoing treatment so it's prudent to make sure we have enough backline cover.

"Christian played well in the first Test in Argentina and is match fit."

Another England player, centre Billy Twelvetrees, was called up by the Lions last week.

Wade, who scored 18 tries in 26 matches for Wasps last season, impressed for England against the Pumas last week in the first of a two-Test series, helping set up David Strettle's try in the 32-3 win.

"We're delighted for Christian," he said.

"He's been in excellent form, played really well on his Test debut against Argentina and he goes with the best wishes of all the England players and management."

Saracens player Barritt had been rested by England for the tour of Argentina and was on holiday in the US.

The Lions - who beat the NSW Waratahs 47-17 on Saturday to remain unbeaten on tour - suffered further injuries before next Saturday's first Test against the Wallabies.

Lions centre Jamie Roberts picked up a knock to his right leg and is due to have a scan, while Manu Tuilagi is still nursing a sore shoulder.

Tommy Bowe has a hand injury but should be fit for the second Test, while fellow winger and Wales international George North has tweaked his hamstring.