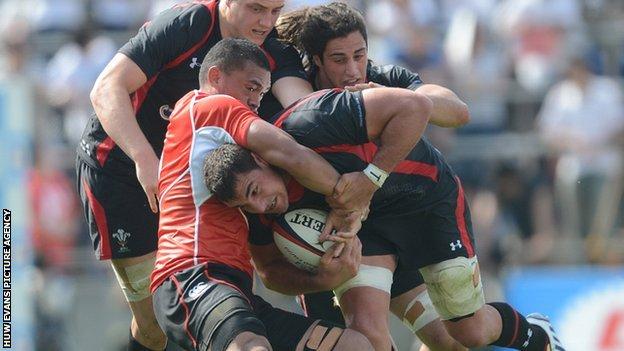 Caretaker coach Robin McBryde defended the decision to take an inexperienced Wales squad on tour after they were beaten for the first time by Japan.

Wales opted to rest Ryan Jones, James Hook and Paul James in favour of youth, despite 15 players being on the British and Irish Lions tour of Australia.

"I made the decisions, I backed this group of young men," McBryde said.

"We've fallen short but hopefully the experience these young men will have gained will put them in good stead."

Wales in Osaka but slumped to a as Japan squared the two-match series.

The tourists did create enough chances to have won the match but either picked the wrong final option or spilled the ball at crucial moments.

"Obviously we're disappointed to lose," McBryde continued. "We paid the ultimate price for not being accurate and making the most of our opportunities.

"If we had taken those opportunities we would have been in a strong position at half-time.

"But you can't take anything away from Japan, they showed what a quality side they are and if you allow them to play with that tempo in their game, they're going to be a match for any team.

"They're very competitive against Samoa, Fiji and Tonga [in the Pacific Nations Cup], so they're an experienced bunch of men. They fully deserved their victory but we could have done our work better."

Despite suffering the ignominy of being the man in charge when Wales suffered their first defeat by Japan, McBryde believed the members of his inexperienced squad would learn some valuable lessons from the tour.

"They've been thrown together at the end of a tough season, different backgrounds the majority of them," McBryde added.

"I'm not going to hang my head in shame because it's important that we learn from this and move on.

Japan coach Eddie Jones, the former Australia head coach, praised his side after their famous win.

"I'm very proud of the team. They have created a history today to become the first Japanese team to beat a top 10 team in the world," said Jones.

"Obviously Wales haven't the best 15 players, but today we played a very good game of Test rugby and it's another step forward for the team."