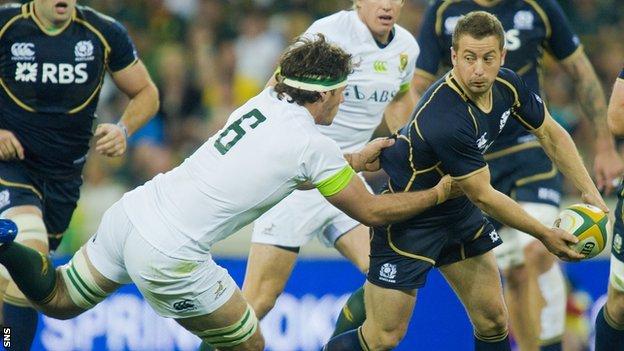 South Africa overturned an 11-point deficit as they fought off a spirited Scotland in Nelspruit.

Matt Scott's try helped the tourists move 10-6 up at half-time and Alex Dunbar crossed early in the second half to extend the advantage.

A converted penalty try brought the Springboks back to within four points.

JJ Engelbrecht touched down while Scotland's Jim Hamilton was sin-binned and Jan Serfontein's late score took the hosts out of sight.

The Scots, who lost their tour-opener against Samoa, will complete their South African series against Italy next Saturday, with neither side having won so far in the quadrangular tournament.

Prop Euan Murray passed a late fitness test to start at tighthead for the tourists, who gave debuts to Peter Murchie, Tim Swinson and Tommy Seymour.

Indeed, Juandre Kruger almost made it over the Scottish try line after running on to Steyn's almighty kick-off, the lock forward running the ball into touch.

Scotland settled into the match and Greig Laidlaw kicked Scott Johnson's side into the lead.

Steyn replied with two penalties of his own before Seymour's invention led to the game's opening try.

The Glasgow Warriors wing made a break for the line after chipping over Pienaar and, though he was stopped short of the line, the ball was recycled well for Scott to cross and set up a simple Laidlaw conversion.

Johnson's criticism following the tour-opening 27-17 loss to Samoa appeared to be having an impact as Scotland met the physical challenge of their hosts.

However, the interim head coach had to contend with knocks to fly-half Ruaridh Jackson and openside flanker Ryan Wilson, who were duly replaced by Peter Horne and David Denton.

Scotland's opening to the second half was bitter-sweet with another try and yet another injury.

Tim Swinson's burst towards the posts unsettled South Africa and the ball was worked left for Scott to offload to Dunbar, who got the verdict after his touchdown in the corner was referred to the TMO.

However, substitute Horne appeared to twist his knee during the move and was stretchered from the field before Laidlaw converted.

Laidlaw was moved to fly-half with scrum-half Henry Pyrgos coming on for Horne as Scotland sought to preserve their 11-point lead.

Their cause was helped by Steyn kicking a penalty wide, but South Africa were then awarded a penalty try after Scotland collapsed a maul on the line and the fly-half atoned for his earlier miss with the conversion.

The TMO was called up again after Jim Hamilton clashed with Eben Etzebeth and the Scotland lock was sin-binned.

Looking to capitalise, the Springboks found some momentum and Engelbrecht ran in a straightforward try on the left, Steyn converting.