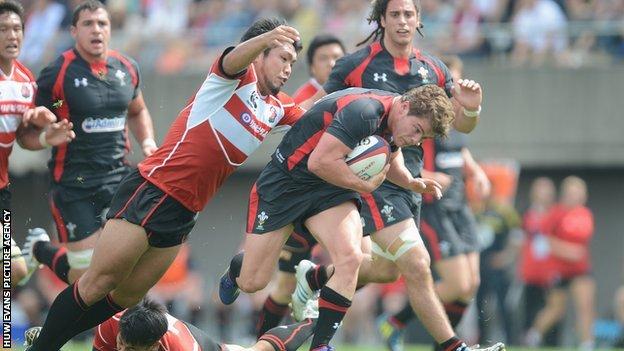 Japan claimed their first win over Wales with a sparkling second-half display to win the second Test 23-8 in Tokyo and draw the two-Test series.

Wales had led briefly in the second half through Tom Prydie's try but rarely threatened Japan after that.

The visitors were missing 15 players on duty with the British and Irish Lions in Australia, while several other senior players were either rested or injured for the tour to Japan.

But that should take nothing away from Japan, who had lost last week's first Test 18-22 but bounced back impressively at the Chichibunomiya Stadium to split the series with Wales.

Biggar had missed an early long-range kick at goal, while Lou Reed almost scored an opportunistic try when the lock charged down Harumichi Tatekawa's attempted clearance.

But after the visitors had dominated the first 15 minutes, Japan broke upfield and, after they were awarded a penalty, Goramaru struck his first successful kick to open the scoring.

Biggar replied to level the game at 3-3 and Wales should have added at least one try as their backs started to click.

Lloyd Williams was bundled into touch just short of the right-hand corner flag as the scrum-half sniped down the blindside.

Then Harry Robinson broke through midfield, set free by Biggar who found the wandering wing with a sweet inside pass, but Japan scrambled back in numbers to avert the danger.

The visitors had lost centre Owen Williams to injury within the half-hour and his replacement Rhys Patchell, normally a fly-half but with the size and pace to slot into midfield, wasted the best opportunity of the half.

The Cardiff Blue broke the line on the right but ignored a two-man overlap, instead cutting inside and then losing the ball forward as he was tackled.

Instead Wales saw themselves fall behind as Goramaru kicked his second penalty after Bradley Davies was penalised at a ruck, giving Japan a slender 6-3 lead at half-time.

Kenki Fukuoka did well to drag rival wing Robinson into touch as Wales showed some adventure after the restart.

But the respite was only temporary as Wales at last ruptured Japan's defence to send Prydie over for an unconverted try.

Patchell took out two defenders and flicked the ball behind his back for Biggar on the loop, who then gave the ball air to find his left wing in acres of space.

Prydie, the youngest player to be capped by Wales and their youngest try-scorer, had not played for his country since June 2010 but made the most of his recall to claim his second Test try.

But for the first time in the match Japan started to find holes in the Welsh defence, with Wing in particular catching the eye with a string of clean breaks in midfield.

The centre deservedly put Japan back into the lead as the Cherry Blossoms hammered away at the Welsh line before creating a huge overlap on the right.

The right-footed Goramaru struck a superb conversion from tight on the right touchline and the full-back repeated the feat 11 minutes later when Japan struck again.

But Goromaru underlined Japan's dominance with his third penalty to cap an historic first win over Wales.

The result is also a huge fillip for Eddie Jones' side as Japan build towards the 2015 World Cup and hosting the tournament in 2019.