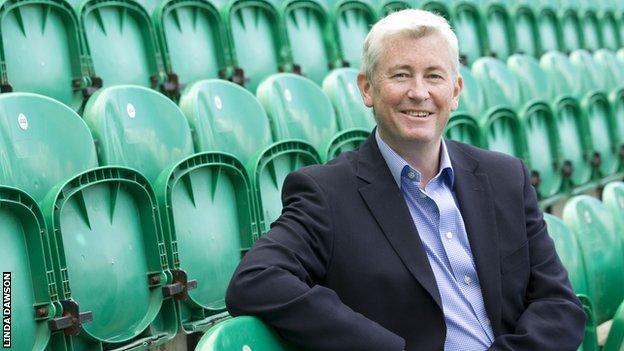 The lifelong Saints fan died on Friday morning following a deterioration in his health.

"It's a devastating loss for the club but especially the Barwell family, to lose Leon at such a young age. As chairman he was always approachable and never ducked a question.

"Although he was very fair, above all he was fiercely loyal to the club - to the players and the staff.

"He saw his beloved Saints at Twickenham last month. The result was not what he would have wanted, but he was there, on the pitch, consoling his players, despite his illness. Saints may well be on the verge of an exciting era; his absence will be desperately felt."

"Going forward, it is vital that we continue Leon's legacy and look to realise his ambitions for the team and the club as a whole."

Barwell, who succeeded his father Keith as chairman in September 2011,

He joined the club's board in 1999, in time to see Saints' only ever Heineken Cup victory in 2000, and was present as the Franklin's Gardens side dropped out of the Premiership in 2007 before their re-emergence in 2008.

The Barwell family will remain the club's majority shareholder and Keith continues to sit on the board of directors.

"Leon was a massive part of the recent successes we have enjoyed, both on and off the pitch, and it is tragic for both the club and the Barwell family that he has been taken away from us just as the next chapter of his life was beginning," added Hewitt.

Saints chief executive Allan Robson said: "Leon was a very popular figure, both within Franklin's Gardens and throughout Premiership Rugby.

"In a typical Barwell manner he was forthright with his views, but he never wanted anything more than for the Saints to succeed and club rugby to continue growing as a sport.

"Of course one of the things that both Keith and Leon strived for was a club that was sustainable for the long-term and not reliant on any one investor for its viability.

"We are in that position because of their principles and it is just a part of the legacy that we will look to continue."