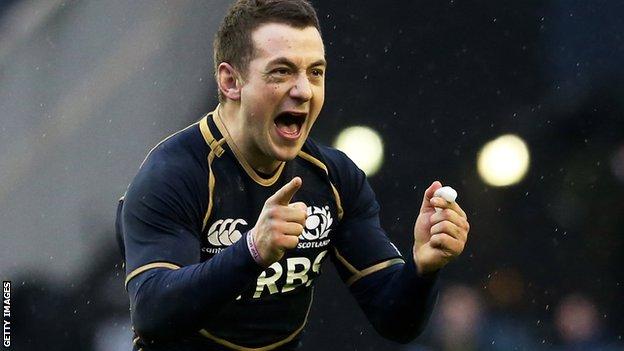 Greig Laidlaw will be "honoured" to captain Scotland against South Africa.

The Edinburgh scrum-half leads the side in the absence of the injured Kelly Brown for Saturday's Test in Nelspruit.

"It's a huge honour for me; I'm disappointed for Kelly, but I play the game the same every time I take the field," Laidlaw, 27, told BBC Scotland.

"I try to put everything into it and lead by example. So I'll try to do the same again. I'm sure all the boys will be right behind me."

Scott Johnson's side, including three debutants, will be aiming to bounce back from the defeat by Samoa.

I want Saturday to come already; it'll be a big moment for me and my family

Full-back Peter Murchie, lock Tim Swinson and wing Tommy Seymour will make their first appearances for Scotland - and Laidlaw is confident they will perform on the big stage.

"I'm sure the three new guys coming in will look forward to it and they deserve their caps," he said.

"All three have played well for Glasgow all season and it's a time for them to shine.

"Scott has made no secret of the fact he's trying to broaden the player base on this tour. So it's up to the players to get out there and show what they've got."

Laidlaw knows Scotland must defend well for 80 minutes if they are to stand any chance of beating the Springboks.

"One of the tests will be the big set-piece battle, so at line-outs and scrums they've got a big pack, but so have we," he said.

"I'm expecting our forward pack to match them and also the backs as well to give us every possible chance."

Laidlaw acknowledges South Africa will be roared on by a passionate home crowd.

However, he added: "The crowd can't influence the game if we do our stuff right. If we get a good start then the crowd might fall silent and we can use that to our advantage.

"I want Saturday to come already; it'll be a big moment for me and my family.

"There's leaders all over the field and they'll be right behind me."