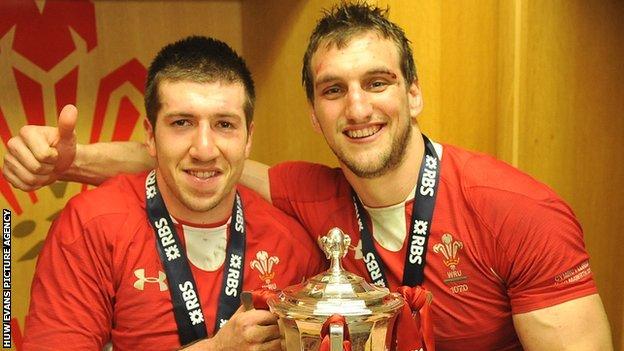 Warburton captains on Saturday in Australia.

Another Welshman, Dan Lydiate, fills the bench back-row place, but Jones believes Tipuric has given the Lions a selection dilemma for the Tests.

"It's going to be a pretty tough choice to leave Tipuric out," Jones said.

"Tipuric is on fire at the moment. He's played the way everybody knows he can.

"There's no pressure on him whatsoever. He's gone and done what he does best.

"He's quite a loose player [and] that type of game suits him on quick, fast grounds and he's a natural footballer.

"But obviously Sam Warburton, [Lions and Wales head coach Warren] Gatland thinks the world of him and you'd expect him to start that first Test."

After the clash with the Waratahs, the Lions have just Tuesday's match against ACT Brumbies as a warm-up before the first Test against Australia in Brisbane on Saturday, 22 June.

But former former Lions captain and coach John Dawes is certain Wales skipper Warburton will start against Australia at the Suncorp Stadium.

Warburton missed the opening two matches of the tour due to a knee injury, but captained the side for the first time in the victory over Queensland Reds last Saturday and leads them again against the Waratahs.

Osprey Tipuric started in the comprehensive 64-0 win over Combined Country XV on Tuesday, but Dawes expects Warburton to get the nod for the first Test.

"I think Warren wants him as captain - he's [Warburton] done nothing wrong," said Dawes, Lions captain on their historic winning tour to New Zealand in 1971 and a coach six years later.

"Provided he's fit he will lead the Lions. If he were not fit then the people who are standing by ready to come in are up to the mark."