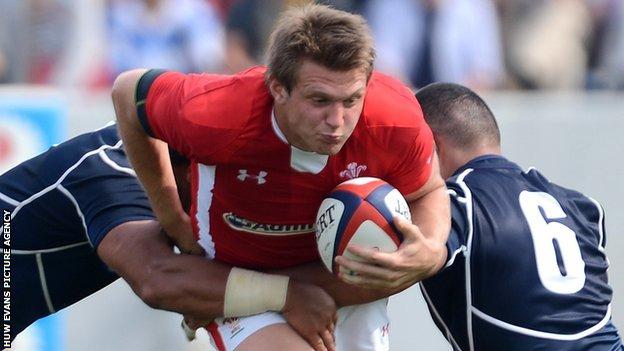 Wales fly-half Dan Biggar says he is disappointed not to have been summoned as an injury replacement by the British and Irish Lions in Australia.

The Osprey was the only member of the starting Wales XV that won the 2013 Six Nations title against England not to earn initial selection for the Lions.

But Biggar, 23, says he understands that decision and the call-up as cover of England back Billy Twelvetrees.

"I'd be lying if I said I wasn't a little bit disappointed," Biggar said.

"It's probably a good decision by the Lions to have someone who can cover the backline because there's been a few injuries. So no complaints from me."

Biggar is currently on tour with a youthful Wales side in Japan, scoring 14 points in their and faces the Cherry Blossoms in the second and final Test in Tokyo on Saturday.

"It's been fabulous here for me," Biggar said.

"Obviously the Six Nations was a massive, massive high and my form has been relatively good all year... it would have been very, very greedy of me to have expected a call-up [to the Lions].

"International rugby is about winning and we did that last week... but we have to put on a good performance.

"We have to make sure the boys coming into the team get a little bit of an easier ride.

"So... we have to be on the money and we have to make sure we're a lot more accurate, doing the simple things right."

Robin McBryde, who has taken charge of Wales' tour to Japan in the absence of Gatland, says that Biggar should not give up hope and can catch the eye of the Lions selectors with a good display in Tokyo.

"The initial selection did suggest that they'd left enough room to invite one or two along. Historically you've got your injuries on the Lions tour," McBryde said.

"Dan can only go out there and prove a point on Saturday and hopefully we as a team will benefit from that.

"We've asked Dan to put his stamp on this game, given him a licence to step up, take on his role as a leader within this team and play things as he sees it."