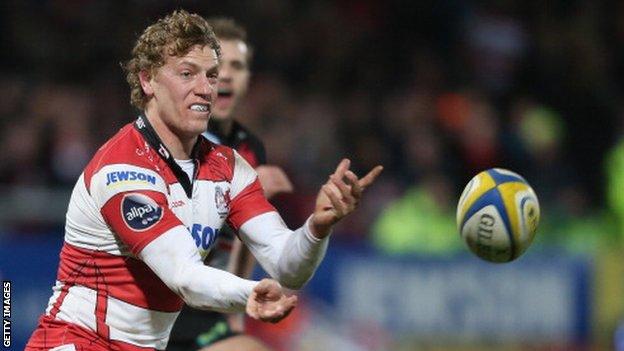 Gloucester legend Phil Vickery has backed Billy Twelvetrees to play more than a cameo role on the British and Irish Lions tour.

The Cherry and Whites centre has been called up by Lions boss Warren Gatland as cover for his injury-hit backline.

Vickery, a Lions tourist in 2001 and 2009, told BBC Radio Gloucestershire: "I'm excited for Billy, I think he deserves to be there.

"He's got more than enough ability to add something to this Lions team."

Twelvetrees, who scored in England's win over Argentina on Saturday, left Buenos Aires on Wednesday to fly to Sydney and join up with the Lions squad.

Billy has a good brain, is a good ball player and I think the fast tracks will really suit his style of game

Vickery, the most recent Gloucester player to represent the Lions, said the 24-year-old's late arrival could work in his favour.

"I actually think coming in a little bit later is a plus," said Vickery. "The build-up to the tour - with all the send-off dinners, the sponsors' photos and all the add-ons - is out of the way.

"The guys are now into the tour - the machine is actually working.

"Billy will have some friendly faces in the players he knows, and he also knows coaches Graham Rowntree and Andy Farrell, so I think he'll slot in really well.

"Going back to 2001, I can remember Martin Corry coming over from an American tour - he was with England - and two weeks later he was starting in a Lions Test. He was a fantastic asset and he deserved his chance.

"It's a great opportunity for Billy. He has a good brain, is a good ball player and I think the fast tracks will really suit his style of game."

It has been a season to remember for Twelvetrees, who a year ago was preparing to move from Leicester to Kingsholm.

He went on to start 21 games for Gloucester and made his England debut during the Six Nations.

Gloucester director of rugby Nigel Davies said after Twelvetrees' call-up: "Billy's almost a blueprint for what you want from a 12 in the modern game. He's got great distribution skills, he's massively physical and he's got a superb kicking game.

"And I honestly think that he's still improving. He's a very intelligent player, who is always looking for ways to improve his game and his selection for the Lions is credit to both himself and the club."