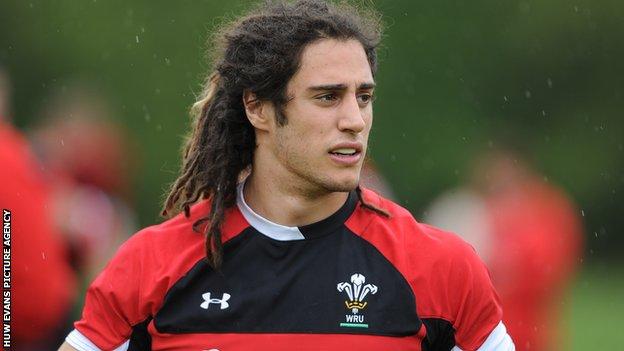 Cardiff Blues flanker Josh Navidi will make his Wales debut in a side showing four changes for Saturday's second Test against Japan in Tokyo.

Navidi starts at open-side in place of James King, who replaces Andrew Coombs at blind-side flanker, while Andries Pretorius comes in for Rob McCusker at number eight.

Prop Rhys Gill replaces Ryan Bevington while Tom Prydie is in for Dafydd Howells on the wing.

"We were proud of the side's effort last weekend but know we will have to step it up again on Saturday," said Wales caretaker coach Robin McBryde.

"It was good to see the character of the squad come through in the first Test and we will need that again.

"The players have again all put their hands up for selection, making it a tough call for us and that shows their determination to get out on the field and represent their country.

"Japan showed what they are capable of last weekend and we know we will have to be at our best to get the second victory and finish the season on a high."

Blues lock Bradley Davies again captains the side and continues his partnership with regional team-mate Lou Reed in the second row.

Fellow Blues forward Pretorius will make his first Wales start in a new-look back row after coming off the bench in the first Test win in Osaka.

Fly-half Dan Biggar has shrugged off a slight hamstring strain to start as McBryde's side are looking for their sixth consecutive victory on Saturday.

But the Wales coach insists his side must improve for Saturday's second Test at the Prince Chichibu Memorial Stadium.

Japan threatened to shock the Six Nations champions in Osaka last weekend as Wales struggled at the breakdown and turned over possession six times in the first half as Japan led until the hour.

Wales were criticised for not having a recognised open-side flanker in the first Test so McBryde is to give Navidi his international debut in Tokyo in an effort to avoid turning over so much ball and protecting Wales' 100 percent record against Japan.

"We didn't feel we were very effecive especially at the contact area," said McBryde.

"Rhys Gill did made an impact when he came on. Ryan Bevington did ok but he didn't have the game he wanted. Scott Andrews was quite magnificent in his performance as was Emyr Phillips.

"In the back row we need to be a little bit more competitive from a defensive point of view, especially in trying to address the speed of ball that were Japan able to get during the game.

"I feel we needed a little bit more leadership at eight and Andries will give us that.

"While Josh Navidi has been in and around the squad for a long time and he deserves an opportunity and am looking forward to seeing him play."

Dragons top-scorer Prydie, who is still Wales' youngest international rugby player, has been rewarded for his excellent Pro12 form with a recall, almost three years on from his last Test against New Zealand.

Coombs and Howells drop to the bench while McCusker and Bevington are dropped from the matchday squad as prop Craig Mitchell returns to the squad after recovering from an ankle problem.

"We were proud of the side's effort last weekend but know we will have to step it up again on Saturday," added McBryde.

Fujita drops to the bench with record cap holder Hirotoki Onozawa left out of the squad.

Two other changes on the bench bring in forwards Shinya Makabe and Justin Ives instead of Toshizumi Kitagawa and Ryuta Yasui.