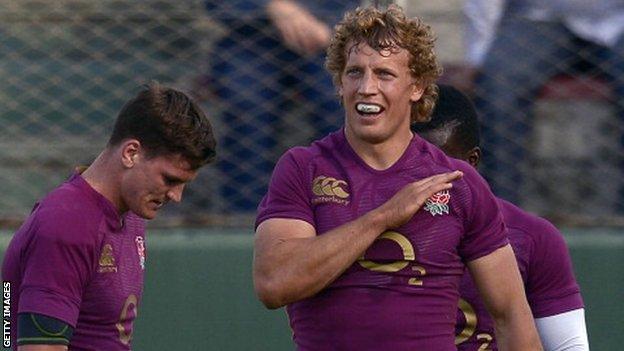 Billy Twelvetrees has said the trust he has built up with Gloucester team-mate Freddie Burns has been transferred from club to country.

The pair worked in tandem in England's 32-3 win over Argentina, developing a relationship nurtured at Kingsholm.

Twelvetrees scored one of England's four tries against the Pumas in Salta, while Burns kicked 12 points.

"We know how each other plays and to bring that to the England shirt is very pleasing," Twelvetrees said.

Playing with a guy week in, week out back at club rugby means you trust each other

"The good thing is that playing with a guy week in, week out back at club rugby means you trust each other and have that communication."

Fly-half Burns started his first game for England, with Twelvetrees, who was called up by the British and Irish Lions on Wednesday as cover for the tourists' injury-affected backline, operating on his shoulder at inside centre.

Twelvetrees believes the debutants made the most of their opportunity, with several first-choice players away with the British and Irish Lions - a list the 24-year-old has since joined ahead of Saturday's clash with Waratahs.

"It's great for all the first caps, they were terrific and contributed a lot to the team," he said. "It's great that these boys can come and show what they can do and not look out of place.

"That's what this England team is about - people coming in and showing how good they are and building trust between players and coaches."