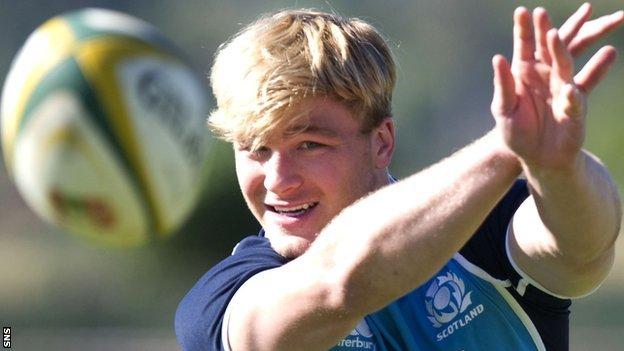 Scotland back row forward David Denton says he is fit and raring to go ahead of Saturday's match against South Africa.

Denton hasn't played any rugby since suffering a knee injury in March playing for Edinburgh.

"It's been a long while." Denton told BBC Scotland. "I'm feeling stronger and faster than I ever have and hopefully I can show that on the pitch."

Zimbabwe-born Denton has a Scottish mother and he expects some of his family to attend Saturday's game in Nelispruit.

"It's great to come back here and be close to some of my friends and family who will come along to the match."

However, Denton's choice of club has not pleased everyone in the family.

"My mother was born in Glasgow and brought up in the west coast so my grandfather's not happy about me playing in Edinburgh," he said.

"He's had to change his allegiance a bit since then."

Denton's upbringing in Zimbabwe has also brought some benefit to Scotland, as the back row has faced some of the Springboks as a youngster.

"Siya Kolisi I've played a few times," he said. "We were at school about an hour from each other so we played inter-district stuff against each other.

"Then I played against him and Pat Lambie at the under-20 World Cup.

After the tour ends, Denton and some of his team mates will enjoy a walking safari to his birth country.

"I'm heading back to Zimbabwe with Greig Tonks and Matt Scott on a four-day walking safari which will be an awesome experience.

"Last year we got got charged by a lion and an elephant so hopefully they get the same experience this year!"

Meanwhile, a number of players took the opportunity to visit a nearby game reserve and came face to face with a couple of lions and a baby rhino.

Al Kellock was brave enough to pick up one of the lion cubs in the enclosure and received a nip on his neck!

"What an experience," said Kellock. "It's not everyday you get the opportunity to come face to face with a lion."

However, on Saturday it's not the lions who Kellock will have to look out for, it will be the 15 Springboks wearing green and gold jerseys charging towards him.