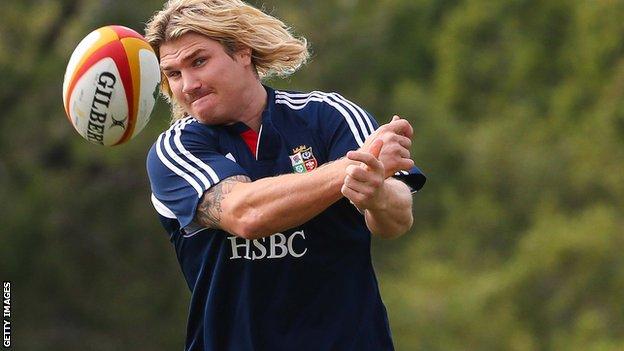 Hooker Richard Hibbard has vowed that "there is so much more to come" from the British and Irish Lions after the 64-0 defeat of a Combined Country XV.

The tourists scored 10 tries, including a double for wing George North, in a crushing victory at the Hunter Stadium in Newcastle on Tuesday.

"There were a lot of positives in the first half," said Hibbard.

"We let a few tries slip in the second half, which is very disappointing... there is so much more to come from us."

Even Brian O'Driscoll, who captained the Lions for the game, admitted the Lions failed to deliver a complete performance.

The Lions have now won four out of four on their 10-match tour which ends with a three Test series against the Wallabies.

While the victory over a team of part-timers was expected, Hibbard admits that Lions head coach Warren Gatland would have been disappointed with some of the mistakes made by the visitors in the second half.

"Obviously he is going to be a little disappointed with the second-half performance," said Hibbard,

"So he should be. You never like to let a few tries slip, and there were concentration lapses, but we know there is a hell of a lot more to come from us."

Gatland announces his team on Thursday to face the Waratahs on Saturday, with many expecting his selection to give an indication of a possible Lions side for the first Test against Australia in Brisbane.

Hibbard, 29, is already looking the favourite to wear the number two jersey for the Lions against the Aussies in the Test series.

The 23-times capped Welsh international already appears to be ahead of England's Tom Youngs and Rory Best of Ireland, who replaced the banned Dylan Hartley on the tour.

Hibbard has nothing but praise for how Gatland and his coaching team are managing the players ahead of the Test series.

"The coaches are very good at managing us. They look after us very well," said the Ospreys hooker and Six Nations title-winner with Wales this season.

"It's about getting minutes on the park, getting people working together and used to each other.

"So I am very positive. I think we can really push on. Four wins, countless tries, we keep building. I'm very confident."