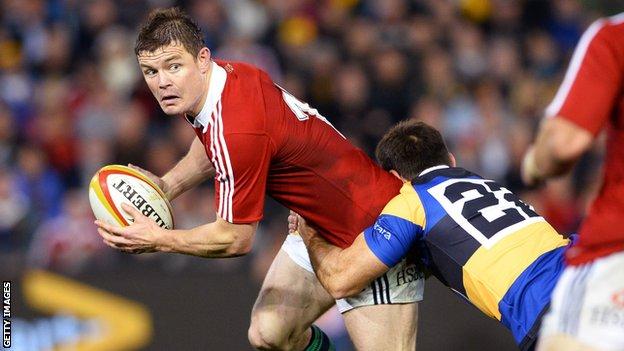 Brian O'Driscoll admitted the British and Irish Lions failed to deliver a complete performance despite a 10-try thumping of a Combined Country XV.

The tourists looked slick in a dominant first half in which they scored six tries with some superb execution.

But despite scoring four more after the interval, turnovers and handling errors hampered the Lions' efforts.

"We probably got a little bit flat, depth-wise, and the accuracy of some of the passing suffered," said O'Driscoll.

The Irishman, who led the side, added: "Balls were thrown behind when a little bit of depth might have made things an awful lot easier. That is one easy fix.

"We tried to kick on in the second half but it didn't really happen for us. It was difficult enough at times, and that was why some of the first-half stuff was so pleasing.

"But that is not to make excuses. We should have been able to kick on from there but we didn't."

Head coach Warren Gatland felt that by emptying most of his bench in the third quarter, the continuity and rhythm of the side suffered.

But he still maintained it had been a worthwhile exercise, despite a third one-sided encounter of the tour against limited opposition.

"It's a lot of use," he insisted. "The team only had one training session together. There was some excellent stuff and some average stuff as well."

Asked which aspects of the Lions' game he was unhappy with, he added brusquely: "Just some turnovers and stuff. But there was some excellent handling and off-loading at times as well."

Gatland also had praise for Scot Stuart Hogg, who impressed in his first outing at fly-half, having a hand in several tries and finishing one superbly himself.

"I thought he played very well," said the coach. "I was very pleased with his performance. He kicked and ran well, played nice and flat. It was a really good performance from him."

Gatland confirmed that wing Tommy Bowe hopes to be fit and available for the second Test against the Wallabies in Melbourne on 29 June, assuming his recovery from a broken bone in his hand suffers no setbacks.

He said there was also a "good chance" that Simon Zebo, who arrived on Tuesday to join the squad as cover for Bowe, might be involved in the next two games.

Despite his demeanour afterwards, the head coach believes the tourists are in good shape 11 days away from the first of the three-Test series against the Wallabies on 22 June.

"There is great harmony within the squad, the boys who didn't play today worked really hard, and we are undefeated," he added. "If we can win the next two games and arrive in Brisbane undefeated, it will be a good positive frame of mind to arrive in."

Country coach Cameron Blades hailed the Lions as an "outstanding" side, but believes his charges showed how the Wallabies may negate their attacking threat.

"We showed in the second half that if you get in their faces, they can make some errors," he said.

"If you can cut down their time to work with, there is turnover ball to be had. But they are a slick outfit and it is going to be a cracking series."