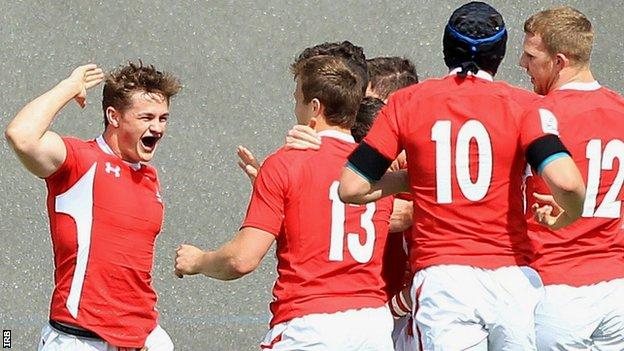 Wales Under-20 reached the International Rugby Board Junior World Championship semi-finals by holding off their Argentine counterparts.

A Hallam Amos try and eight Sam Davies points from the boot gave Wales U20 a 16-0 half-time lead.

Danny Wilson's side had beaten Samoa 42-3 and Scotland to set up the clash against Argentina, who had beaten the Scots 44-13 and the Islanders 28-16.

In the Pool C decider, Osprey Davies kicked the game's first points within two minutes and Wales held on to the lead throughout Stade Henri Desgrange, La Roche-sur-Yon in France's Loire region.

Newport Gwent Dragon Amos raced clear as Wales attacked from deep, Davies adding the conversion and a drop-goal to seal a confident opening period by Danny Wilson's side.

But Argentina fought back with open-side Matera going over while Fernandez adding the conversion and penalty.

However, Davies calmed Welsh nerves with two more penalties, the later after scrum-half Rhodri Williams - also of the Scarlets - was brought down by lock Guido Petti Pagadizabal's high tackle.

Pagadizabal was banished to the sin-bin, as was replacement Juan Pablo Aguirre in the dying minutes for Davies's final penalty to end the contest.

Wales will face South Africa in the semi-finals on 18 June, with New Zealand versus England in the other semi.