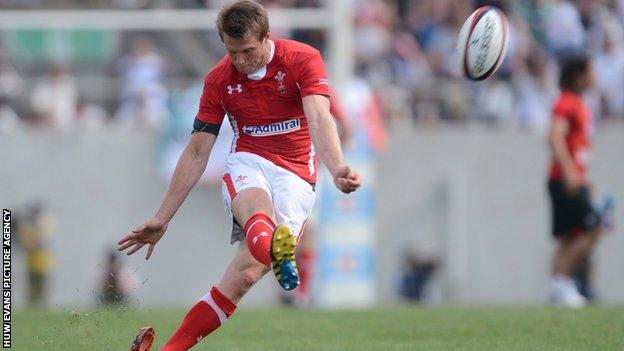 Team manager Alan Phillips says there will not be a video referee for Wales' second Test against Japan in Tokyo.

"There will not be a TMO on Saturday and we are looking into it," said Phillips.

Biggar has a hamstring niggle after the 22-18 win in Osaka but Phillips says he has no real concerns over his fitness.

"We will know more about selection on Thursday because we still have a few guys with a few problems," Phillips added.

"Dan Biggar is not training today because he has a tight hamstring. It's nothing to worry too much about but we're looking after him."

Of more concern to Wales was the issue of the lack of a TMO or video referee, which has become the norm for professional rugby in Wales and Europe and in tournaments such as the Six Nations and Heineken Cup, where technology has been adopted to rule on contentious decisions during a game.

"Tier two nations don't have TMOs generally because it is a fairly big cost factor for them to fly people in from Australia and New Zealand," Phillips said.

"I was a bit surprised but they tell me that is the ruling and that tier two sides don't have to have them.

"When you come to a developing country these are the things you have to deal with, like Canada a few years ago."

Wales were unhappy about not being notified before kick-off in the first Test that there would be no TMO during the clash at Kintetsu Hanazono Stadium.

The visitors were unhappy because an early Biggar penalty, which the fly-half thought was good, was ruled out while Wales were also unhappy at Emyr Phillips being blocked for Japan's first try.

The block which prevented the hooker making a tackle could have led to Wales suffering their first historic defeat to Japan.

Shaun Edwards, Wales defence coach, was adamant that if there had been a TMO employed, Japan's first try would have been ruled out.

"Clearly we felt there was obstruction for Japan's first try but they got away with it," said Edwards.

"Had there been a TMO I'm sure he would have disallowed the try but we had not been told there wasn't one.

"It wasn't until Dan asked about his kick and then lads queried the try that the referee told us.

"It's not a criticism of him because he was unsighted for the try but it just shows what we have at our disposal back home to clear these things up."

Prop Craig Mitchell missed the first Test because of an ankle injury but he trained on Tuesday and Wales expect him to be available for the second Test.